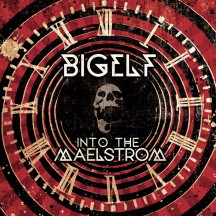 
Picture The Beatles, Black Sabbath & Queen with OK computer's production! Climb aboard and take the trip...

No, that wasn't me: I was just the humble transcriber of Mike Portnoy's words about Bigelf's Into The Maelstrom. Let me tell you that the ubiquitous Mike wasn't so far from reality.

What's a Maelstrom? It's some kind of an eddy, that happens twice a day near to a Norwegian archipelago. It has fascinated many writers, as Jules Verne in his world famous book Twenty Thousand Leagues Under the Sea and Edgar Allan Poe in that sweet, little story that A Descent into the Maelstrom is. It seems that this whirlpool has inspired also some wonderful musicians.

But let's quit Wikipedia and plunge into the music. Six years after 2008's Cheat The Gallows, Bigelf return without two of their longtime members. Guitarist Ace Mark and drummer Steve Frothingham respectively were replaced by Luis Maldonado and that aforementioned nobody that Mike Portnoy is. This leads to the fact that Damon Fox's will, in the songwriting phase, shines now clearer than ever, being he is the only original member left in the band.

Consequently, Into The Maelstrom is less flamboyant and explosive than its predecessor, even if the band's craziness is overall unchanged. This album has a lot of Beatles vibe, reaching the top in the classical "Control Freak", but also inherits the heavy traits from Black Sabbath and Pink Floyd's psychedelia, with an always present - even if sometimes too shy - eye opened to the future.

Into The Maelstrom is slow and mid-paced in its majority, as many doomy releases, but ready to flawlessly go frantic. With tracks like "Already Gone" Fox's creature achieves once again the not so easy task of merging great amounts of influences; creating not just a shattered collage, but a tasty and well-stirred emulsion.

The introduction of the new members was a success. Maldonado's guitar contribution is extremely appreciable and drummer Portnoy manages not to steal the show but rather providing what the album's sound needs, plus some welcome reminders of why he's who he is now. Besides, Fox brings to the microphone some of the best vocal lines of his career.

Bigelf's latest album may not shine in originality or innovation, but is a great reminder of what the 70s brought, without falling into plagiarism. Nostalgia for the older, lesson for the younger, hallucinogens for everybody!

Written on 16.03.2014 by
R Lewis
Hopefully you won't agree with me, diversity of opinions is what makes metal so beautiful and varied.