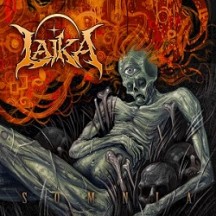 
Do we really even need the "Gothenburg" title anymore? Props to the Swedes for trademarking this particular flavor of melodeath, but with bands like Arch Enemy and Eluveitie having a patchy catalog quality-wise, not to mention the banality of recent In Flames albums, bands from across the globe are doing it better. Like Canada's Laika.

6.5 rating, yet they're pretty solid? How is this possible, you ask? Well, Laika is quite good, but the production of Somnia is overwhelmingly bad, to the point of complete distraction. Typically speaking, with most albums, each instrument is recorded at separate times, then pieced together in the production phases to make it sound like a single unit of musical performance. Somnia is the first time I've ever distinctly felt that separation in recording. Even on some of the most atrocious albums I've reviewed, I still picture the band performing together. With this, I can't help but picture the band not even being in the same room at any time during the recording. Keyboards are usually so buried as to be entirely unnecessary, the vocals go from smothering the mix, to completely muddied-out, and then we've got possibly the most irritating bass tone possible. Don't even get me started on the horrendously clunky bass sound.

Which, like I said, is an awful shame. If we were to review just the band, they would surely be deserving of somewhere between a 7.5-8.5. The riffs are massive and chunky; going from melodic Arch Enemy style anthems, to straight-up death metal fury, to something approaching Meshuggah/djent jumpiness (minus the polyrhythms.) The keyboards (when you can actually hear them), add that little extra depth we used to hear in Scar Symmetry, and the vocals are a furious mix of death and -core, something akin to Svencho of Aborted. It all comes together to make Somnia a collection of varied, exciting, memorable melodeath. Unfortunately, I'm reviewing the album at face value, and this production is a total wet blanket on what is otherwise a lovely album.

Don't let the bad production mislead you; Somnia is well worth checking out if you dig melodeath. It's too bad this just feels like you're listening to the blueprints of what could be an awesome band.