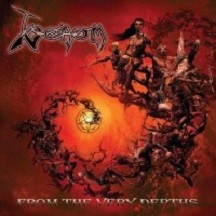 
The twenty-first century has not been kind to extreme metal pioneers Venom. Four releases into their reunion and they have struggled to hit the proverbial nail on the head. As such, it was difficult to expect much on the new album, From The Very Depths. Yet somehow, Cronos and friends have managed to reverse this trend and come out with an album that despite its overall generic sound is still quite enjoyable.

Sure this isn't going to revolutionise heavy metal like Welcome To Hell and Black Metal did all those decades ago. It isn't even going to be remembered as a great example of their craft. But then neither are most of the albums being released in speed and thrash metal these days.

Unlike the last few previous albums that were generally mid-tempo affairs flavoured by flawed attempts at modernity, From The Very Depths looks very much to their past for inspiration. And by past, we're talking their more late 1980s/early 1990s thrashy albums than the punky speed metal of their first three albums.

This is first and foremost an album of chuggy thrash riffs backed up by Cronos' distinctive bark and massive bass sound. And whilst there is no denying they are generic as hell, they are enjoyable due to their catchiness and classic sound. There is less variety than on previous affairs but that is a good thing given how hit and miss some of that variety was. Instead, where variety is used it is generally to good effect like the huge sounding "Evil Law," complete with Slayer-esque guitar hooks or brooding (by Venom standards "Smoke."

And unlike the previous albums, the band doesn't sound forced. Indeed it sounds more like someone's lit a fire under them and are determined to show the world that there is more to them than a smattering of pioneering albums released thirty years ago.

The album does suffer from the usual Venom indulgence of being too long. And this is where that lack of variety bites with a number of the faster songs blurring into one another. At other times they get too hung up on a cool riff and overplay it.

Despite its flaws, From The Very Depths is a welcome addition for us Venom fans who were starting to wonder whether there was any life left in the old warhorse. It's a revitalisation of the band and hopefully a sign of better things to come.