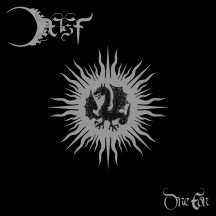 
Doom metal is a nice genre that manages to breathe fresh air every now and then, although the concept behind it is older than in most other styles. On the other hand, there is the heavy and dragging approach that it has always been, which is exactly what you get when listening to 0 X í S T's new album One Eon. A deep bass together with melancholy laden guitars, slowly punching drums and both harsh and clean vocals. So basically you get the idea: it's doom.

One Eon is an album that you might think you have already heard if you are familiar with the genre; there is nothing new or innovative. Yet the band does their job quite well, and the songs create an atmosphere that fits many moods. Whether wandering through big cities or nature places, being awake or half-asleep in bed, your thoughts will be matched by the music and lyrics. 0 X í S T provide an easy entrance to their concept, keeping it open for many minds.

There is not much to say about the instrumentation, the only point maybe that the production is very good, at a well-tempered level and supporting the atmosphere. All instruments play their parts in the mix and a crushing feeling reflects the lyrics. While we're at it, the lyrics are - again - nothing you wouldn't have heard of already. An odd song might be "Instincts Of A Serpent", which feels a little weird if one follows the vocalist throughout the possible feelings of a snake ("I must shed my own skin, ...").

However, 0 X í S T deliver a nice album that is enjoyable at some occasions, yet won't leave the listener mind blown. The only outstanding song is "Enshrine", which is an excellent track actually. That one is followed by "In The Hood Of The Clan Of Tombs", a good choice for an opener with clumsy lyrics setting the overall mood and thoughts of the following tracks. The overall conclusion should be that if you like doom, you should try this album out. Don't expect a masterpiece, but a solid and satisfactory album.