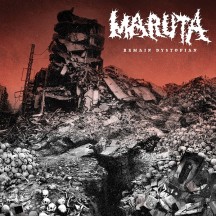 
The reason I suck at reviewing albums isn't (only) because I'm goddamn lazy. It's because albums like Remain Dystopian leave me speechless.

Just like Joe Pesci, Maruta doesn't fuck around. These guys keep it around 30 mins and that's that. I discovered them back when Forward Into Regression was released, which was also another little bomb to the groin. Their brand of grindcore mixed with technical death metal remains both sick and slick like a smooth serial killer. Thanks to the great production, the riffs and overall performance turn out rich but still really abrasive, like sandpaper that you want to make love with.

On a closer look it seems like everything got fine-tuned. The sound is clearer but at the same time punchier. I'd say even the songwriting got better as I'm left like "how the hell did they do that" more often than previously. On that note, major thumbs-up for the guitars as they sound massive and deliciously dissonant at times. Maruta also makes intricate tempo changes that not only separate the tracks from one another, but also set them apart a little bit from contemporary grindcore acts.

It pleases me to see bands growing and getting their well-deserved recognition. This is shown not only by Relapse Records taking the band under their wing but also through the stellar singers collaborating with the band. Tomas Lindberg and J.R. Hayes, legends from At The Gates and Pig Destroyer respectively, provide their know-how in two killer tracks. One can only hope that Remain Dystopian will be the entrance to even greater things to come. I'm already waiting for the next blast.