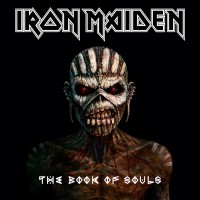 
After The Final Frontier we had to wait five years for this album. But does The Book Of Souls deliver a great experience?

It does! Let me start with saying that this album is actually my 3rd favourite Iron Maiden album. Some (if not most) people might be surprised by that but I will also mention that I like the more progressive style that Iron Maiden went for with their 2000s albums. If you are not a fan of progressive metal, then the chances are pretty high you won't be a big fan of this album. Another reason of why I rank this album so high, is because I honestly think it's one of their most consistent.

I wouldn't be surprised if certain people find this album to be boring because of how long some of the songs can be. Many people for example will hate the long isntrumental part in "The Red And The Black". I love it!

Personally, I would say that the longer songs are actually the best songs on this album, songs like "The Book Of Souls","The Red And The Black", "If Eternity Should Fail", and, of course, "Empire Of The Clouds" (which I would dare to call an instant classic and is in my top 5 favourite IM songs).

Some people might wonder how Bruce sounds on this album. Bruce's performance on this album is overall really good. He does strain his voice on certain parts of songs. This is especially true for "When The River Runs Deep" and "The Great Unknown", but other than that, he sounds excellent, most notably on "The Man Of Sorrows", "Empire Of The Clouds", "If Eternity Should Fail", "Tears Of A Clown" and "The Book Of Souls".

The lyrics? Well they are excellent as you would expect from a Maiden record. In fact I recently showed a friend (who isn't a metal fan) the lyrics of "The Man Of Sorrows", "The Red And The Black" and "Tears Of a Clown". He was genuinely surprised by how well written those lyrics were.

I truly recommend this album. Like I said before, if you're not a fan of the longer Iron Maiden songs, you will probably be disappointed by this album. They really put a focus on a more progressive style. If you're a fan of progressive metal, listen to it; you will most likely enjoy it a lot. If you are an Iron Maiden fan then you've probably given this album already a listen. And if you haven't... do it! It's a very good album.