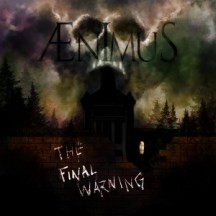 
When I reviewed Ænimus's debut album back in 2014, I remarked that it was not likely to be an album I could shelve and forget once my reviewing obligations had ceased, and I was correct; This Illusion has seen some regular rotation over these few years, so on receiving news of The Final Warning, I was very pleased to learn that Ænimus would indeed have a future.

Moreover, that future is looking just as auspicious as the past, with The Final Warning serving up the same stalwart, melody-driven metal as the band's debut. Rooted in doom, reaching for power, and spanning traditional heavy metal in between, The Final Warning has hooks to spare; the knack for unearthing interesting and ear-catching vocal lines that Ænimus demonstrated on This Illusion returns in force, and with the heightened quality of musicianship comes a slightly more adventurous spirit in songwriting. A lot of Ænimus's style is contingent on a straightforward and classic combination of simplistic riffs and catchy choruses, but now and again there appear some flourishes that really class up the place. Flavors of epic doom give the album a sense of import and a dark undercurrent that invokes some of the old horror-heavy spirit of King Diamond, although Ænimus has a much brighter and more upbeat personality.

That brightness translates into the production as well. This Illusion never suffered from the bit of rough edge it had, but The Final Warning's cleaner, more even production gives Ænimus a sheen of professionalism; where the first album was a hidden gem from an unknown band, this sophomore effort is a coordinated, polished effort that can contend with similar major-label acts. The instrumentation has tightened up and really pops now; meanwhile, Anders Sevdin handles his vocal range more conservatively, but if he isn't reaching for the sky quite as often as before, his mid-range is bolstered by a great deal more confidence and conviction - and still garnished with some sky-piercing sirens. He sings with a fuller voice and cultivates a commanding presence that performs a great service for this band; having strong material is one thing, but having a charismatic frontman who can sell the material is even better, especially when there are a million bands playing roughly this same style.

Overall, everything about The Final Warning is an improvement over This Illusion: the performances, the production, the songwriting, and the general presence of a better-established band. It's hard to pick a favorite from among tracks like "For Every Voice," "Alone," and "The Last Of Our Kind," but there isn't a single supbar track on this album, so I've found myself listening to The Final Warning straight through on every occasion. As before, I'm going to predict that The Final Warning stays on regular rotation in my collection until Ænimus III rolls around.