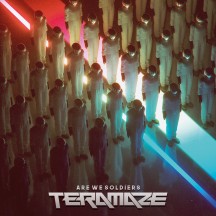 
Teramaze have been around for 25 years, which was a shock to me when preparing this review, as I first heard of them in 2015. Admittedly, a near-15-year hiatus probably didn't help expand their reputation, but they've been making up for lost time this decade in order to leave their mark on the prog metal world.

Following the long gap between 1998's Tears To Dust and 2012's comeback AnhedoniA, Teramaze have been steadily releasing albums since, including the highly impressive Her Halo in 2015, my introduction to the band. A release that fell firmly under the "melodic progressive metal" umbrella, Her Halo shone above many of the band's peers with its excellent songwriting, instrumentation, and vocals. Whilst their now-fourth post-hiatus release, Are We Soldiers, doesn't make a grand departure from the confines of the genre, it exhibits perhaps a more modern touch than the classic sound of Her Halo and contains enough variety to distinguish itself from its predecessor.

The most obvious change is the return of original vocalist Brett Rerekura, who was replaced by Nathan Peachey for Her Halo, which ultimately turned out to be the latter's only full-length with the group. Peachey had a powerful, soaring voice on Her Halo that was clearly part of the same lineage as many other prominent power and prog metal vocalists. Whilst Rerekura shares a similar range, it feels somewhat more restrained and grounded, and occasionally inspired thoughts of more modern prog vocalists, such as those from TesseracT or Voyager. The two vocalists are both great, but I think they each fit the sound of their respective albums better.

At the surface level, not much has changed, vocalist aside. The chuggy, groovy riffs, the reliably hooky vocal choruses and mild pop sensibilities, the proggy instrumental flairs and solos are still present. However, I definitely feel like the sound on Are We Soldiers has shifted away from the more classic approach of Her Halo, which drinks from the same well as 2000s Dream Theater and Symphony X among others, to something a bit more modern, closer to their peers in the Australian prog scene such as Voyager. Perhaps the most striking way to note the difference is by comparing the title tracks of the two albums; both among the most simplistic and poppy cuts of their respective albums, each has anthemic chorus hooks, bursts of nifty lead guitar work, and more. However, whereas the pianos, proggy synths, and acoustic guitars of "Her Halo" bring to mind Symphony X's ballads, the trancey electronics of "Are We Soldiers" remind me of Amaranthe, whereas the vocal melodies bear similarities to some of TesseracT's work. Across the album, the differences between the two aren't as drastic as those descriptions may make it sound; the prog definitely becomes more prominent in the later stretch of Are We Soldiers, and the 10-plus-minute cuts from each album far more closely resemble the same band.

Now are these changes to the benefit or detriment of Are We Soldiers? To be honest, I'm not sure it's either. For certain, I think Her Halo was one of the finest efforts of its kind this decade, but this latest release is perhaps slightly more unique, whilst the quality remains at a similar level. At almost 70 minutes, it somewhat overstays its welcome, but there's not really an obvious weak song in the track list to cut. It grows over the course of the album, but even the early tracks do their jobs, including the imposing opener "Fight Or Flight" and the uptempo "From Saviour To Assassin". My personal top pick is "Orwellian Times", with some really nice and varied vocal work, a lush midsection, and some intriguing rhythmic developments.

If one thing really stood out as a weakness, I think the mix could be a bit unbalanced at times - the vocals had a tendency to drown out the instruments, particularly the guitars, which undersold some interesting riffs. Aside from that, this is an impressive record that has solidified Teramaze in my eyes as a standout band in the melodic prog scene.

Written on 05.07.2019 by
musclassia
Hey chief let's talk why not
More reviews by musclassia ››