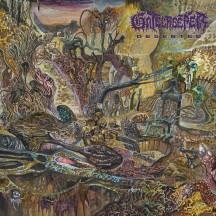 
I wasn't aware that Arizona was a part of Sweden.

If I told you that Gatecreeper were from Sweden, you'd eat it out of my hand with no doubt given how close they sound to the Swedeath sound, but they come from boring ol' Arizona. But you probably would have doubts, since you probably heard of Gatecreeper before, given how they did get a lot of attention with their debut full length Sonoran Depravation and their split with Iron Reagan. They even became one of the newer wave of bands that actually got attention outside of the metal sphere. So let's see how well they capitalize on past success with this one.

The core of the album is unchanged from the competent Swedeath worship of the debut, giving us 40-something minutes of riffy thrashy death metal coming at different paces and joined by the gnarly grunts. What made Gatecreeper great to begin with is how despite emulation of a sound, they were still able to craft some really great riffs and play around with different paces and approaches, making them a great fix of more than one death metal standard. Even if Deserted would be kept to its core sound, it would be a decent follow-up and a worthwhile album.

But Deserted does feel like it extended the range of bands to take inspiration from, compared to the Entombed and the Bolt Thrower of the debut, this time having some Asphyx and Autopsy too to make the sound just a bit dirtier and the slower pace just a bit more prevalent. The album is still full of adrenaline pumping riffs but there's a strange ominous atmosphere all throughout to make the bludgeon get a filthy tone. A nice change of pace, but one that doesn't let them lose too much of the menacing sound that put them on the map.

Gatecreeper are still a long way from coming into their own, but extending their palette is a definite step in the right direction. They got the chops, they got the inspiration, they'll find direction too hopefully.

Written on 08.10.2019 by
RaduP
Doesn't matter that much to me if you agree with me, as long as you checked the album out.
More reviews by RaduP ››