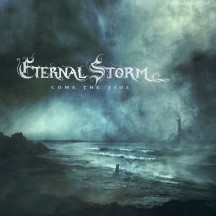 Listening to this album, Eternal Storm really feel like a band already a few albums into their career, but this is their debut full length. The feeling might be explained by them being around for about a decade and only releasing one other EP (that could pass as a full length) in 2013, so Come The Tide sits at a weird place, with the band both having and lacking the experience necessary. Also it feels really weird to hear this branch of melodeath coming from somewhere so far from Finland like Spain. Ok maybe they're not technically that far, but Spain is still not among the first countries where I'd search for melodeath this good.

I lied when I said that this album really feels like coming from a band already a few albums into their career. How do I immediately tell this is almost a debut? A band this good would've afforded a much better production if this wasn't so early in their career. Give this album the proper caring and it becomes quite indistinguishable from the heavyweights in the style. As it is, Come The Tide's production is slightly jarring, but not jarring enough for it to be impossible to get past and enjoy the other aspects of the music. It's clear enough for everything to be audible, but it's not raw in an effective way either. And this is the album's biggest flaw, which is obviously something I'd expect to see improve on following releases.

What could also come as a flaw is that despite the masterful songwriting and performance, Come The Tide really feels close to the melodeath sound that has already became somewhat past its prime and it doesn't really feel like it has too much to set it apart from that have already pushed the sound to its current state. But this is all very hypocritical of me to say considering my very positive review of the latest Insomnium despite that one not being very forward-thinking either. The difference is that Eternal Storm still have the potential to push towards a new sound. But given how well they execute this one, should they really take the risk? Because even though I don't listen to as much melodeath as I used to and I generally don't look for new bands, I hardly found an album as replayable as this one.

Production and originality aside, everything else works in this album's favor. Eternal Storm seemed to have somewhat already made some connections, given the relatively well-placed label and the myriad of guest performances on the record, from folks coming from Asgaroth, Ulcerate, Canopy and Foscor. These bits are carefully interwoven with the rest of the music, giving us stuff like a saxophone solo or a clean vocal part that don't feel out of place in an already very dynamic and well-written album. The band approach the melodeath core from all different directions, whether heavier or lighter, they seem to have reached a sense of maturity in their songwriting as to make each part feel vital to the whole, so much so that even the 10 minutes long song feel like they pass too quickly and must be relistened.

Hopefully we'll get some sort of remaster for this album for its anniversary of something, because it would be such a shame for such great music to be held back by limitations in the production. Perhaps it is my relative lack of exposure to new melodeath, but I feel this just might be the best melodeath debut I've heard lately.

Written on 15.10.2019 by
RaduP
Doesn't matter that much to me if you agree with me, as long as you checked the album out.
More reviews by RaduP ››