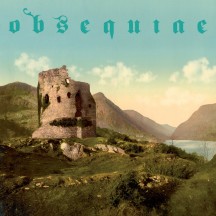 
Is coming out with an album every four years a medieval tradition?

Obsequiae is a pretty unique band, in that it sits comfortably in between folk metal and black metal without sounding like either of those. There is a lot that the band does that is quite similar to what other bands are doing, and one can trace influences to the likes of Summoning or Forefather, but even so their music has such a distinct sound. Coming from the not so rich in medieval history Minnesota, Obsequiae is more or less a one man band with Tanner Anderson doing guitars and vocals and bass and a whole bunch of other instruments, with his work going as far back as 1998, when the project was still called Autumnal Winds, and alongside him there is a harp player and a drummer, the latter of which makes his debut in the project with this album. So now we have the third album, complete with the four year break in between them.

If you were already familiar with Obsequiae's sound, The Palms Of Sorrowed Kings will not bring many new surprises, but there are some slight changes. But if this is your first contact with the band, their sound could be described as medieval black metal that is warm and hazy. The black metal element is obviously felt mostly in the vocals and guitar works but even as is, it is extremely melodic in such a way that sounds really pleasant and that perfectly ties in with the folk aspect of the band. With the guitars being almost always at the forefront, it pushes the vocals, drums and bass to secondary roles, therefore having the melodic aspect of the guitar work carry so much of the album's weight, which showcases the insane quality of the songwriting.

The folk black metal pieces are interwoven with medieval folk bits, being rather clearly separated instead of blended together. The harp interludes, courtesy of third member Vicente La Camera Mariño, act as so much more than just to divide the songs or to offer some pause from the metal moments, and if the metal moments weren't as great as they were, I'd say that these interludes could've been the album's highlight. The Palms Of Sorrowed Kings does bring the sound further a bit, by giving these interludes more space and by adding a few more folk instruments and sporadic clean vocals in the mix, but without compromising the already established sound. The fairly raw production, often reminding me of those two bands I named as obvious influences, give the album such a hazy and detached-from-time feeling that works so well with the medieval aspect of the music. The same way that Summoning transports the listener to Middle Earth, so does Obsequiae, though the realm is unclear.

It is so rare to find music that perfectly evokes that fantastical feeling of wonder that we have regarding those almost mythical times in the middle ages, and why most fantasy art fits the setting in the medieval world. Less black plague and feudalism and more chivalry and glory.

Written on 12.12.2019 by
RaduP
Doesn't matter that much to me if you agree with me, as long as you checked the album out.
More reviews by RaduP ››