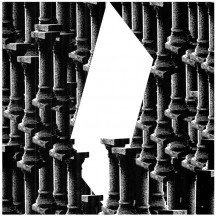 
I've heard this album described as "sonic Ayahuasca". I think it's more than fitting.

I first heard of this Brazilian band when they were one of the bands announced for 2019's Roadburn Festival. Obviously being among a sea of relatively just as great bands and with some clashes where I couldn't even see bands I really wanted to see, I didn't attend their performance, but their name did stick in my mind. So seeing some positive reviews for Metaprogramação and seeing them having not only signed to Neurosis' label but also opening for them in a tour, that obviously meant I had to check Metaprogramação out. Oh boy!

Now calling Metaprogramação metal is a bit of a stretch, but the ingredients are there. The album is visceral, has plenty of heavy guitars and bass, and since so much dark ambient and drone and post-rock whatnot that gets blended with metal passes off as metal, so should this blend of industrial rock, noise rock, power electronics and whatever the hell this is. Having listened to their previous albums too, back when they were called "Deaf Kids", I noticed a strong sludge and crust punk element as well that seems to have been diminished for Metaprogramação, which in turn goes full on psychedelic noisy industrial. And when I say psychedelic, I fucking mean it. I mean it when I say noisy and industrial too, but Jesus does this album really feel like a trip.

Think Sepultura's Roots but take out all the nu metal and leave mostly that Brazilian folk percussion, now mix it with some Amebix, take out the crusty vocals, put in some Whitehouse and The Body for good measure, have The Velvet Underground jam over it, might as well drop some The Butthole Surfers as well, and feed that through enough reverb and delay to make My Bloody Valentine jealous. Now for the most essential element, get lost in the jungle and take copious amounts of drugs*. At the end you should roughly get Metaprogramação if you're still alive or not yet captured by Brazilian militias.

In the album's 40 minutes runtime, it can feel a lot longer or a lot shorter, but no in between. And after listening to it, there's no way I can just stand up and not feel nauseous.

*MS does not condone the use of drugs, but if you listen to this album, you're getting pretty much the same experience.

Written on 25.12.2019 by
RaduP
Doesn't matter that much to me if you agree with me, as long as you checked the album out.
More reviews by RaduP ››