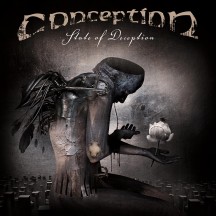 
A reviewer a while ago wondered about a word meaning "very glad this exists but also a bit disappointed". I do share the sentiment, but I still feel more glad than disappointed.

Reunion albums are tough to do. Expectations almost always exceed the band's capabilities of living up to the legacy. But what they do have going for them is that they benefit from just how many people are curious and glad to hear that band after such a long period of time. After all, the old classics are still there and they will be just as good regardless of the quality of the reunion albums. It is a bit tougher for a reunion album's follow-up. They proved that they've still got it, but what now? State Of Deception is sort of between the two. Conception did release an EP, My Dark Symphony, in late 2018. So we already had a taste of neo-Conception, but it wasn't really the reunion album.

Let me preface this by saying how unexpected it was to see Conception back together. When Roy Khan quit music, it seemed to be for good. And even if it wasn't, me, and I assume a lot of others, would assume that if he came back to music, he would more than likely rejoin Kamelot. They fared fairly well without him, but most people agree that the post-Khan albums aren't really up to standard, and Kamelot were always more popular than Conception (hence why promotional materials for this album had to name Roy as the ex-Kamelot singer). A Conception reunion seemed to stay in the "Wouldn't it be cool if that happened?" realm. And yet, here we are.

Ok, so after two introductory paragraphs, it's about time I actually started talking about the music. A lot of things aren't a surprise for people who already heard My Dark Symphony. Basically State Of Deception feels a lot like Conception's Flow with a healthy amount of leftover Kamelot feelings, almost to ease in new fans which would come from Kamelot instead of Conception. The album is obviously more in the progressive direction than anything done under Kamelot, and it is also a bit more in the metal direction than the relatively tame My Dark Symphony Was. I do like both Flow and Kamelot a lot, so I don't really mind the sound as much, but I do indeed miss hearing something more akin to Parallel Minds. Not only that, but the production feels very awkwardly mixed at times, I can't really put my finger on it, but something that keeps me from properly enjoying it.

Roy Khan's voice is obviously a highlight on the album, as he is, after all, one of the best and most instantly recognizable voices in metal. I definitely did feel his absence from the metal world and finally getting my fix of it feels damn great. He doesn't feel like he aged a day, and I can say that I actually like his vocals here more than I liked his in Poetry For The Poisoned, which was the last we heard of him before the reunion. Thankfully the album is much more than just an excuse to listen to his vocals, and since the rest of the band is quite intact from the original years, you can expect some great musicianship outside of just the amazing vocals. A lot of the album has a somewhat straight-forward feel that works really well, whether more ballad-like songs like "Anybody Out There", or the more prog power ones like "She Dragon", or the duet with Amaranthe's Elize Ryd. One that was a bit surprising was the relatively dark and theatrical "Of Raven And Pigs", which is somewhat of a bold opener, but the rest of the album lacks any real surprises. Also one of the best decisions regarding this record was remastering "Feather Moves", by far the best Conception track from their first post-reunion release, the Re:Conception single, and the only song that surprisingly didn't appear on the My Dark Symphony EP.

Overall, there is a lot to appreciate on State Of Deception, most of it is quite tame with very few surprises. Really great performances and songwriting within the limits that it set for itself, but the production and the lack of ambition keep it from achieving its full potential. And both being and not being the comeback album meant that it couldn't properly get the benefits and drawbacks of either. But all things aside, feels damn great to hear Roy again.

Written on 12.04.2020 by
RaduP
Doesn't matter that much to me if you agree with me, as long as you checked the album out.
More reviews by RaduP ››