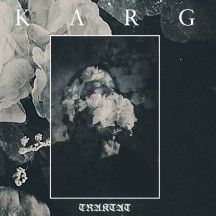 
Some life advice for you young'uns looking to make a name for yourself: Find a thing. Do it well. Even if that's the only thing you're good at.

Michael V. Wahntraum, solo mastermind behind the Karg name and Harakiri For The Sky vocalist, has found a particular niche sound during his experimentation that strikes all the right chords for fans of contemporary atmospheric and melodic black metal. While it may not reach all audiences in the same manner due to its specifically constructed format, those who seek out this typical brand of evocative extremity will undoubtedly find themselves challenged with whether or not Traktat is truly deserving of the album of the year title so many are calling for.

With an output of nearly an album per year stretched out over the course of a decade, there is an understandable inconsistency in quality that rides like a roller coaster through the duration of Karg's existence, but any uncertainty surrounding this album is readily laid to rest at the outset, with its transfixing intro that bleeds a stream profusely until its eventual climax roaring in after the 60-minute mark. Relentless, harrowing screams make up the bulk of the vocal delivery, neatly packaged alongside the grandiose melodies that aim to trigger an emotional connection with an audience susceptible to feelings of remorse, angst, self-loathing, and depression in general. But within that seminal thought lies a semblance of positivity, banking on the hopes and dreams of one who can harness the power of life's randomly generated inequality and channel it into something effective at creating positive change. The beautiful melodies herein speak volumes at length to that specific point.

One glaring, yet forgivable issue with this album, is that it relies so heavily on the repeated formula that otherwise renders any track the album's best or worst, in that there's a mid-paced buildup, an epic melody, and a culmination of emotional shrieking over daunting melodic riffs. If that same approach were more varied and broken up, rather than coming across as a tactical procedure, then Traktat would truly deserve to be among the contenders of the year. Alas, due to its ambitious nature and relying too heavily on the same formulaic structure throughout its 75-minute duration, it's slightly cheapened or marred by its own effects. While far from a sub-par album, it also stops just shy of the peak of what could have been, much like its predecessor -- for the exact same reasons, mind you. If Wahntraum is to ever break out through the barriers of an already saturated genre, then consolidating his anguish will be tantamount to his project's ability to grow beyond the small following it's so far gathered.