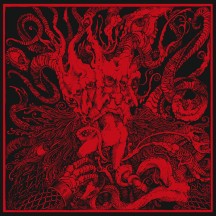 
Together with Wormlust, Skáphe is essentially the elder statesman of Mystískaos, the band that's been around the longest and exerts the most creative influence over the overall ethos of the collective. Does this somewhat father figure type role also come with superior music? Absolutely.

Skáphe originally started around mid 2014 when Poole wrote some new Chaos Moon tracks that he deemed to be enough of a deviation from the Chaos Moon sound to start a new project around. Much like Chaos Moon, over the years, through the addition of new personnel, the sound of Skáphe has been gradually expanding. The 2014 debut was mostly Poole, but 2016's Skáphe² added Misþyrming's D.G. to the mix on vocals, and the Untitled EP from 2017 featured Wormlust's HV Lyngdal contributing some additional background ambiance. Now in 2020, Skáphe³ takes the Skáphe lineup one step further with the addition of Jack Blackburn (Entheogen, Guðveiki) on drums.

As one might imagine, this new lineup has resulted in Skáphe³ quite likely featuring the broadest sound of any Skáphe release yet. The swirly, discordant psychedelic black metal vortex that the band made its mark with originally is still intact, but this time around an improved sense of production has made the music considerably less cavernous, bringing out all aspects of the mixing to much greater effect. This comes as a significant boon to the listener, as the music of Skáphe has always been considerably layered and demanding on the part of each instrument. Improved production thus allows for a greater appreciation of all aspects of the composition: the hallucinatory, wobbly guitar riffs, Blackburn's phenomenal drumming, the creepy, Lurker Of Chalice-y bass lines, and D.G.'s sonorous howls.

One noticeable aspect of Skáphe³ that seemed to have been missing from past Skáphe releases is a sense of unbroken continuity in the songwriting. Indeed, this album very much feels like one extended, 37 minute track that was only broken down into 10 separate parts after the fact. Each track flows into the next in virtually seamless fashion, so much so that, unless one is paying close attention while listening, it can become very easy to lose track of exactly what track one is actually on. Normally this is an aspect of songwriting that irritates me a bit, but for music like Skáphe's, of such a hypnotic, psychedelic variety, it actually works for the better, as it works wonders toward making Skáphe³ feel like one massive, uninterrupted Ayahuasca black metal ritual.

Much like the new Serpent Column album released on the same day, Skáphe³ essentially takes many of the past elements that made Skáphe so dynamic and interesting in the first place and upgrades them with a better sense of production and a greater manipulation of tempo and atmosphere. Likely more so than ever before, this release really offers the listener a full understanding of all the various ingredients that go into creating the Skáphe sound. Each aspect of the composition is phenomenally on point, and, perhaps benefiting from their collaboration with Wormlust last year, the trippier, more dark ambient - leaning aspects of Skáphe now sound more eerie and enveloping than ever. A few more spins could easily lead to me deeming this as the best Skáphe release to date, but for now it can most definitely be said that (probably along with the new Esoctrilihum), this is the standout black metal album for 2020.

Written on 06.10.2020 by
Apothecary
Comforting the disturbed and disturbing the comfortable since 2013.
More reviews by Apothecary ››