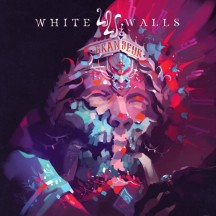 
Radu asked me to review Grandeur as a favour; it turns out he was partially doing me a favour.

Amidst all the endless negatives to come from 2020, the continued arrival of quality new music has been one of the few beacons of positivity keeping myself and many others going as the weeks of lockdown stretched into months, and one metal genre that's been particularly fruitful is prog. Between groups returning from hiatuses, established acts meeting expectations and less experienced/renowned bands delivering, I've found a lot to enjoy as far as progressive metal in 2020 goes. Grandeur is the third release from Romanian group White Walls, and serves as another strong addition to the ever-growing collection of satisfying releases.

Despite the suggestion in the name, White Walls do not sound like Between The Buried And Me: no frenetic arrangements, monolithic track lengths or ballistic intensity to be found here. As far as closer comparisons go, I must confess nothing immediately comes to mind; it's not that White Walls have a stunningly unique approach, but they don't flirt too heavily with the sound of any particular established act. I did find myself thinking at times of Black Crown Initiate, but White Walls never approach the intensity that BCI deliver; there are screamed vocals consistently throughout Grandeur, but little more than that on the extreme metal front aside from the odd riff here or there. This works to the album's benefit; the harsh vocals don't feel intrusive and add a good dimension to the stretches in which they appear, but Grandeur impresses more in its cleaner moments.

I mentioned in my review of Teramaze's Are We Soldiers that the group had shifted towards a more modern prog sound, namedropping TesseracT and Voyager in the process; I feel like all three groups are somewhat useful reference points for songs or sections of Grandeur. There are songs that lean towards TesseracT-esque djent, in particular "Holy Worse", with the contrast between some of the crunchier grooves and more atmospheric inclinations, whilst several tracks brought Teramaze to mind, most strikingly the bouncing groove that opens "Starfish Crown". Bouncing grooves are quite prevalent on Grandeur, whether in verses, choruses or bridges, but they're reliably satisfying. Another enjoyable element that pops up from time to time is the use of shimmering post-rock tremolo, which works particularly well in an evocative section later on in "Home Is On The Other Side". At the same time, White Walls can deliver some powerful riffs with real heft to them, such as on the brooding "Locked-In Syndrome".

Grandeur is an effective combination of a few different approaches, some heavy, some lighter, that is ably supported by memorable vocal melodies delivered with prowess by frontman Eugen Brudaru, as well as satisfying riffs and hooks. It's a consistently enjoyable listen throughout, with "Starfish Crown" and lengthy, soulful closer "Marche Funèbre" perhaps the pick of the bunch. I would say that what it possesses in the way of consistently it arguably lacks in the way of real standout killer moments; everything on display here is very likeable, with no real slack or filler, but whilst Grandeur is an easy album to revisit, it's not one that actively draws me back. However, it's possible your mileage may vary; certainly, if you're hungry for more quality prog this year, White Walls are well worth a try.

Written on 17.11.2020 by
musclassia
Hey chief let's talk why not
More reviews by musclassia ››