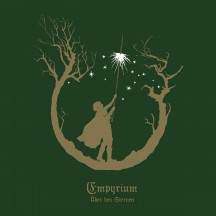 
In 2021, Empyrium have the hindsight to slip back into being a dark folk band a bit more gracefully than in the 90s by not foregoing all the metal elements.

There's certainly a history of metal bands releasing dark folk records, partly stemming from the "acoustic version" being the most usual forms of bonus track, and also partly due to a lot of metal sharing the similar pastoral admiration of nature. Ulver's Kveldssanger, Agalloch's The White, Winterfylleth's The Hallowing Of Heirdom are all great examples of detours into pure folk by bands who previously incorporated folk into their metal sounds. But when Empyrium did it in 1999 with Where At Night The Wood Grouse Plays, they continued to shed the symphonic/folk/doom metal sounds of their previous two albums on the follow-up, 2002's Weiland, too. And then they broke up, as a dark folk band, not as a metal band with a dark folk detour. The members did go on in metal bands like The Vision Bleak and Noekk, but until 2014's The Turn Of The Tides started dipping its toes carefully back into metal sounds, Empyrium was to stay as such.

I don't want to make it seem like The Turn Of The Tides was a big return to being a metal band, since I feel like it's even less metal than Über den Sternen, but the touches of doom metal meant that they reunited the band with some sort of hint of the band's earliest sound. The Dead Can Dance-ish darkwave of that album is subdued here in place of a sound closer to the dark folk of their mid era, however it might also be the first Empyrium album in 24 years that you could call a metal album, even if it's mostly not one. Hell, the title track can't really be described as anything but, even if it's the only track that starts out with the distorted riffs instead of slowly building up to them if at all. So the result sounds like it builds upon all of Empyrium's previous work: the somber metal of the early era, the pastoral dark folk of the mid era, and the evocative gaze/wave synths of The Turn Of The Tides.

I'm not that big of a fan of the baritone clean vocals, but I must admit that they do have a charm that wouldn't have worked as well with any other band, partly because the name carries more weight, but also because they clearly uphold their mastery over evocative pastoral atmospheres on this one as well. The production does add a bit of polish, but keeps the sound from feeling too artificial, giving each of the instruments the space it needs to breathe within the rich textures, and accentuating both the metal and the folkier parts just as well. As a whole, the two are much better integrated than they were on the previous album, and there isn't really any place where the metal part feels hammered in, and the only criticism on this part is that sometimes it feels like the folk part would be building up to a metal part, when it doesn't really, but that could be just recurring expectation on my side. As a whole, the album feels very patient with the way it builds atmosphere and moves within its structure, it never lingers more than it has to, but it's in no rush to get anywhere. And for a 50 minute album to feel longer than it is without feeling tedious, it's a real blessing.

There are moments listening to this that remind me a bit too much of Dead Can Dance, but they twist it just enough into their own sound that it is never in danger of being anywhere near pastiche. Also, far from the worst band to sound too much like. Especially when you can do it so well. Über Den Sternen is really beautiful.

Written on 10.03.2021 by
RaduP
Doesn't matter that much to me if you agree with me, as long as you checked the album out.
More reviews by RaduP ››