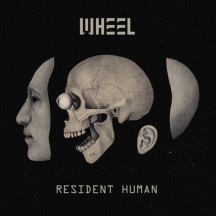 
Much like Soen, Wheel got in one safe Tool-worship album before showing what they're truly capable of.

Tool's influence on alternative and progressive metal is difficult to overstate, so it's not surprising that emerging bands in this musical area might end up sounding a bit too close to them on early records, as well as drawing inspiration from them elsewhere (for example, using short words as band names). Soen's Cognitive owed an awful lot to Tool, but they've done an admirable job of finding their own voice on subsequent records. Wheel were arguably even more derivative of Tool on their debut album, Moving Backwards. Still, it was a very enjoyable album that demonstrated the skills that the musicians in the band possessed, both technically and compositionally, so I was hopeful that once they'd developed a more distinctive musical approach, they could shine just like Soen now do, if not brighter. Resident Human offers very positive signs on this front.

Soen's most recent albums, Lotus and Imperial, have exhibited an increasingly accessible approach, with short songs focused on the vocal melodies. That's not the case with Resident Human, which opens with a 12-minute epic in the form of "Dissipating". However, this song isn't a convoluted prog-metal assault; instead, it's a gradually evolving mood-setter that's very measured in its development, starting off with a slick bass groove and allowing the guitars to take on a more textural role for the longest time, until eventually it shifts into Tool-esque rhythmic punch. The guitars can and do deliver a number of groovy, complex and hard-hitting alt-metal riffs on Resident Human, but they spend just as much time, if not more, acting as an atmospheric element in the mix, in the forms of sustained tones or simple-yet-effective arrangements. They also regularly deliver some really wonderful melodic leads, whether it's the captivating work before the final assault on "Dissipating" or the delightful contributions in the 'chorus' (for lack of a better word) of "Hyperion", another lengthy epic.

The guitars play a large role in shaping the sound of Resident Human, but arguably the bass and drums are even more significant, particularly in the quieter, moodier sections (of which there are many - Resident Human is perhaps softer overall than Moving Backwards). The bass and drums get a workout early on during "Movement", one of the shorter cuts here, but also work together effectively in less frantic manner during the early stages of "Fugue" and "Resident Human". The title track, the third song that exceeds the 10-minute mark on Resident Human, undergoes a delightful progression from a soft beginning, slowly yet surely intensifying throughout the first half before bringing some real heft in the second half (arguably the most Tool-influenced period on the record), ending with some blistering riffing.

There's a lot of great things about Resident Human; the basswork and drums are consistently excellent, the guitars deliver some wonderful melody, and the group are equally adept at muted proggy development and more in-your-face alternative metal riffing. They've also done well at moving further away from Tool, which was something I was really hoping to hear now that they had a well-received debut under their belt. Yes, there's definitely sections here and there that undeniably bear Tool's mark, but it's nowhere near as nakedly obvious as it was on the debut. Instead, I found myself thinking more of bands such as Pure Reason Revolution, Porcupine Tree, Karnivool and Riverside in certain sections of the album. More than that, though, I found myself regularly being able to just enjoy the great music on display without any obvious influence lurking in the background.

There's still certain areas that the band can work on. For example, whilst I really enjoyed the tracks where they were patient in the gradual development of songs, particularly "Dissipating" and the title track, there were certain sections, most strikingly on "Hyperion", a song that I otherwise thoroughly enjoyed also, that it felt like they were chopping and changing between ideas a bit too regularly, disrupting the flow of the song. Probably the biggest area the group can still work on, however, are some of the vocal arrangements.

I haven't mentioned James Lascelles's vocals before now, and I will say before I get into any negative that I enjoy his voice and his contributions on the whole; he has a nice tone and does a very good job of matching the intensity of the instrumentals. However, whilst for the most part Wheel's sound is much more to my tastes than Soen's, one area in which the Swedes have the upper hand on the Finns is how reliably satisfying and memorable the vocal melodies are, despite the complexity of the music. It's definitely a challenge to manage to write effective vocal hooks to accompany intricate instrumental work, but it's a challenge that Wheel haven't completely navigated, as there were quite a few vocal arrangements that I felt lacked in direction or didn't resolve in a particularly satisfying manner. However, this wasn't a uniform issue throughout the record, nor was it in any way a dealbreaker, and it's something I have full confidence that the band are capable of overcoming on subsequent efforts.

On the whole, I thoroughly enjoyed Resident Human; it feels like a natural progression and maturation of the sound on their already impressive debut record, and it sees Wheel starting to truly emerge as their own distinctive entity. Soen have successfully grown from imitators of others into a band that shines all on their own, and based on this sophomore effort I'm very optimistic that Wheel can replicate that success.

Written on 24.03.2021 by
musclassia
Hey chief let's talk why not
More reviews by musclassia ››