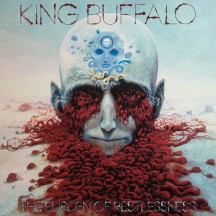 
Although restlessness may be a burden, it seems to be a beneficial burden for King Buffalo, at least so far.

The Burden Of Restlessness comes a year after King Buffalo's previous album, Dead Star. That in itself is quite a quick turnaround, but it's nothing once you hear that this is just the first of three albums scheduled for release in 2021 by the band. That's a very ambitious project, and one that perhaps highlights just how restless King Buffalo have been. Only time will tell whether all three albums represent a wave of successful productivity from the band, or merely superfluous output for the sake of it, but this first album offers positive signs.

In my review of Dead Star, I highlighted the shift away from the gentleness of Longing To Be The Mountain, as well as the somewhat scattered writing approach on that album. The Burden Of Restlessness takes somewhat positive steps on both fronts, first by feeling very cohesive on the songwriting front, and second by acting slightly as a bridge between the mellow tone of Longing To Be The Mountain and the harder drive of Dear Star in its loudest moments, even though it leans much closer to the latter. As a result, you get an album that is consistently satisfying, and one that manages to offer pleasant levity whilst delivering an array of well-crafted heavy riffs.

The lighter moments are rarer, but enjoyable when they arrive. "Locusts" is centred around an airy, delay-based riff, one that still has a hint of urgency that makes the subsequent heaviness feel natural, but it still provides some nice, purposeful downtime. Probably the closest section on The Burden Of Restlessness to Longing To Be The Mountain is closing song "Loam", the clean guitar work on which combines nicely with Sean McVay's softer singing tone. I do wish there was some more music in this vein on The Burden Of Restlessness, as I felt that the uplifting, easy-going nature of Longing To Be The Mountain helped King Buffalo stand out in a saturated stoner rock scene, but perhaps one of the other two albums released this year will veer closer to that approach.

In contrast, much of The Burden Of Restlessness is on the heavy side, and often quite brooding. There's times when the stoner rock approach feels a bit too driving and conventional, such as on "Hebetation", and I don't feel like McVay's voice is entirely suited to this style; as such, I'm not hugely keen on this song. However, I am completely on board with King Buffalo's approach on the opening song "Burning", a slow burn that features some nice atmospheric leads and intensifying grooves to drag the listener in. It's a really strong opener, but there's other cuts here that match it in quality; "Silverfish" starts off quite quirkily, but brings some quite forceful chugs later on, whilst "The Knocks" almost gives me Tool vibes at times. I think "The Knocks" may well be the best song here, with its really well-judged progression and dynamics, as well as featuring memorable hooks; however, I do also get a lot of joy out of the heavy second half of "Loam".

King Buffalo have developed into a band that fits the heftiness associated with the animal they have named themselves after; the hippie-esque stoner rock is now straddling stoner metal and even alt-metal boundaries, and is doing so in an accomplished manner. The more focused approach on The Burden Of Restlessness gives the album a clear edge over Dead Star, and although I was introduced to the group in a much gentler form, this record gives me more confidence that they can shine as a heavy band.

Written on 04.06.2021 by
musclassia
Hey chief let's talk why not
More reviews by musclassia ››