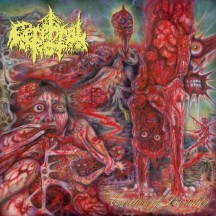 
If you're the type of person who's scrolled through historical charts of pre-2k death metal releases and still yearns for more, Cerebral Rot are here for you.

Reaching across the vast expanse of the Americas and finding yourself in the beautiful West Coast city of Seattle, names such as Drawn And Quartered and Infester will inevitably burrow their way into your lexicon. They may not hold the same weight as other heavyweights in the genre, but you have to take into account the effects of the burgeoning grunge scene at the time, seducing many a talented musician into its creative black hole in favor of capitalizing on a trending musical opportunity with hopelessly romantic sights set on a life of fame and fortune -- aka delusions of grandeur. For every Soundgarden there are thousands of broken hopes and wasted dreams.

Anyway, there is hope for the future. In 2019, Odious Descent Into Decay dropped to rave reviews, all but elevating Seattle death metal prospects from virtually non-existent to kind of maybe worth keeping an eye on. Despite lacking really even a shred of originality, their full-length debut atoned for it by offering a healthy dose of what made the old school so intriguing in the first place: groovy licks and gloomy riffs, cavernous atmosphere, catchy fills, pummeling cymbal and bass work, putrid and evil growls. It's a character study in revivalist death metal.

This brings us to Excretion of Mortality, which almost exactly follows that incredibly successful formula, but something is slightly off in the mix. The guitar tone this time around is dulled to a mild, yet noticeable, extent and the transition into less ominous, doomy passages takes away from the aggressive overtones established on its predecessor. There's still a heavy crunch factor and infused melody to the riffs, there's still an otherworldly growling beast manning the mic, there's still an ancient origins feel to the overall project, and yet somehow it just doesn't manage to instill the degree of intensity as their initial go-around.

Cerebral Rot are deserving of equal recognition bestowed upon Gatecreeper and labelmates Tomb Mold in spite of seemingly taking a step or so back in their journey towards overtaking the revivalist death metal scene, but that doesn't mean they aren't in a growth phase figuring out what best works for them -- and what doesn't. With another LP or two, they could easily assert dominance over their competitors based on their current body of work.