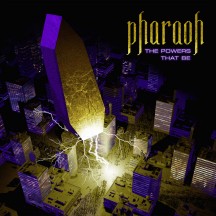 
The powers that aim to be - by no means bad, but there are other options...

So, The Powers That Be is a pretty traditional record: no big surprises to be found here. It's an album with songs that are competently put together, but at the same time couldn't capture my interest.

To be honest this should be right up my alley; I usually like this kind of traditional-sounding stuff. However, there are a few issues that I have with this one.

Let's start with the one of those: the production. It's not bad at all, to be perfectly honest. That said, it's the same thing I mentioned in my review of White Magician's Dealers Of Divinity. Just like that album, The Powers That Be has a very traditional-sounding production. Now, I'm all for being teleported back to the 80s sound of heavy metal. Thing is though, I feel like a lot of bands are trying to deliver a sound like that with their mixing, and in the case of Pharaoh's latest work, I can't really say it's among the top of the class. Ancient Empire, Shadowkiller, Spellmaster, Seven Sisters, Eruption and Night are all examples that come immediately to mind when I think of albums with a more unique and (better) production to them. In those, everything seems to be a bit more tightly balanced and special. This one is solid in every department, but nothing unique: a bit of a missed opportunity.

Wow, I blabbered a lot about the production. Let's talk about the music itself. It's... fine. No big surprises with this one. The flow is good and there's more variety on offer than on a lot of other albums in this particular type of heavy metal. Like I said, no big surprises though. I was really hoping for (at least) a track or two that would really grab my attention; unfortunately, that didn't really happen. So, for me there are no big highlights on The Powers That Be. The opposite is also true though; at no point did I feel that this record really dropped the ball.

The performances of the bandmembers are also good overall. The vocals have a very nice raw style to them, whilst the guitars, bass and drums work well together to deliver a strong cohesive sound. Again, like with a lot of the other things I talked about, it's very competently done; that extra spark you would hope for is sadly lacking, though.

A deeper dive into the lyrics shows that the pattern continues. Ok for the most part, but it isn't exactly going to win a literary award either: a very traditional power metal style here (not exactly surprising since it fits into the US power metal category as well).

Where does that leave us? Well, if you like this specific style of heavy metal, then this might be a pleasant listen for you. I will say, though, that I think there are quite a few other albums (for instance by the bands I mentioned earlier) that deliver experiences with a little more bite to it.