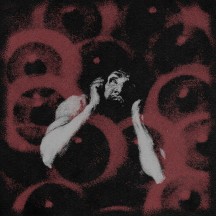 
The devouring void is all consuming. And as the meta-physicist of the poor in all of us instinctively knows, void needs matter as sure as bread needs butter. It's just the nature of things folks, also something about being one of the basic laws of thermodynamics. But I digress in my pseudo-interpretation of science, so let's get back on topic, which happens to be one hell of a creative death metal output from a band you have most likely never heard about.

Let's be objective: Any album name containing the word "hallucinations" is expected to be at least a little weird. Otherwise, you just end up being disappointed, am I right? Well, the Portuguese Australian duo known as The Devouring Void does not disappoint with this monster hallucinogenic journey that is, apparently, of the hypnagogic kind, which, as you may already know means "related to the state immediately before falling asleep".

Composed, performed and recorded by sensation Nuno Verdades with singer and lyricist Timothy Clay, this collection of seven fast and furious songs is reminiscent of psychedelic darkness masters such as Sigh or Hail Spirit Noir. My first impressions left me with a sense of awe that I only remember experiencing from the likes of Gaerea or Uada lately. And that's just the appetizer/all-inclusive title track.

But while the mood is mostly set in motion by a creative blend of death/black metal, there is also a definite element of controlled doom-y atmosphere. Think about that hypnotic Swallow The Sun mid-tempo rhythm. You know: here, pause, here, and half-pause, there. Songs like "Phosphene" and "Paracusia" have a similar melodic doom magic. "Lucidity" and "Pavor Nocturnus" are more on the At The Gates side of the spectrum, that is if you factor in the extra dirty stoner sludge sound. In contrast, "Peduncular Hallucinosis" and "False Awakening" are more melodic compositions that remind me of early Dark Tranquillity until they both morph into aggressive behemoths with a bit of an anger problem. Still, when the dust settles, it is impressive stuff that could have shined even more had it benefited from a bigger, cleaner production.

Once the deep sleep cycle ends with a sense of utter unease brought on by those Hypnagogic Hallucinations, this is the stuff that makes me want to keep exploring unsigned bands such as these guys. Because once in a while, you end up discovering a true promising band and an unpolished gem of an album like this one. And then you can start rooting for them to get more attention. If they persevere in their effort, those two guys are destined for greater things. So please go support The Devouring Void, and do listen to this, preferably right before you fall asleep for a full "in context" experience.

Written on 04.08.2021 by
Dream Taster
Bringing you reviews of quality music and interesting questions such as: