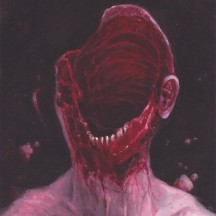 
Pic related: it's my face after listening to this album.

Figuratively, at least. I'm not literally defaced. And I might be exaggerating even figuratively and be giving you false expectations. This is not a brutal death metal album or a hardcore infused anything that will legitimately feel like a shotgun blast to the face. As much as the cover art would suggest otherwise, Defacement deals more wounds to the soul than the body. Originally started in Libya of all places as Deathcrush, the band relocated to the Netherlands, recruited Bestia as a drummer (who you may also know from Earth And Pillars among others) before changing their name to Defacement. I liked their debut album, Deviant, quite a bit, but it didn't have the immediate appeal of seeing the cover art that this follow-up has.

And it seems like the band itself really stakes all their chips with this one, bringing us the unusual case of the self-titled record that isn't a debut. Normally that would come through some reinvention of sorts, but here Defacement is just a more honed version of the blackened death sound that we heard on Deviant. You know, with a cover art like that, you don't expect as much time as this to be spent on interludes and the sort, but Defacement has spent most of its ability points on atmosphere. Said atmosphere is more nauseating that suffocating though (I guess it depends on how loud you play it), like a dissonant akin to Portal and Abyssal, but with a bigger atmospheric black metal presence.

I'm stuck between being moved by the interludes and finding that they break the flow of the album, and between appreciating the repetitive and formulaic structure of the album and finding it limiting. A lot of what Defacement does, on paper, should sound like a disaster. A bunch of interludes, a cover art that sells the album too brutal, and a structure that invites repetition and makes it feel like the band is coming at you in waves. So the fact that Defacement manage to not make me mad at either of those, but actually get along with their choices, should probably be attributed to the production making each instrument hit its damn hardest even in its atmospheric maelstrom, and the fact that the vocal performance really drives it out of what could have been a pitfall made of the lack of variation.

In the end, despite its splattery cover art, I find that Defacement, instead of plunging at you, drags you in. A dissonant vortex that carefully tiptoes around some pitfalls.

Written on 14.09.2021 by
RaduP
Doesn't matter that much to me if you agree with me, as long as you checked the album out.
More reviews by RaduP ››