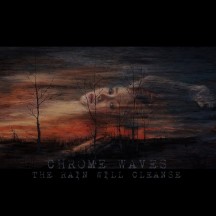 
To be, or not to be? That is the question. To be audacious that is. Chrome Waves, which are basically James Benson from Amiensus and Jeff Wilson (ex-Abigail Williams, Nachtmystium) are indeed audacious. A great introduction to this American post-black band is undoubtedly 2020's Where We Live. It is so good that I almost forgot to listen to The Rain Will Cleanse before writing this review. That is when doing a little writing research turns into a major distraction. So, since no one bothered with that album either, it is on par with the best bands in the genre such as Harakiri For The Sky and Alcest.

But back to The Rain Will Cleanse. The atmosphere is most definitely post-metalish and that much is obvious from the start on "When Night Falls". There is even a straight progressive rock vibe on tracks such as "Sometimes" and "Tired". It is like a drowsy, hypnotic version of bands such as Porcupine Tree or The Pineapple Thief. At the same time, the drone bleak rhythms evoke Anathema or Antimatter while the music might overall be more on par with Alcest sans screams. And that is about it. It is a solid formula of post-black with some qualities but it is also showing its limits. There is very little variation throughout and while the atmosphere is cool and relaxed, there is not much that leaves a lasting mark on the psyche. "Aspiring Death" comes close but ultimately falls short after so much softness on the album, I don’t know what to really do with the sudden emotional outburst, which also does not last. The production is a tad airy, which fits the new sound but might come as a surprise after the clean sound of its predecessor.

To bring the point home, Where We Live was a fantastic album. That slow crushing doom tempos overlaid with post-black melodies and nonchalant vocals was a compelling recipe. Meanwhile The Rain Will Cleanse goes slightly in a different direction, more like if Steven Wilson went post-metal. Often engaging but sometimes meandering into too much softness for the average metal listener. With so much foreshadowing on the soft tracks, and the intensity of their previous record, this album does feel like part one of something that unfortunately never really materializes for me. I really tried to appreciate it, but maybe I just don't get this one.

Written on 23.09.2021 by
Dream Taster
Bringing you reviews of quality music and interesting questions such as: