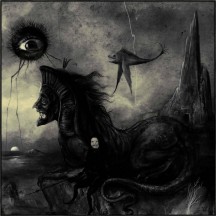 
Album artwork depicting a maned dragon/salamander, a floating eyeball, and a walking fish? Yup, definitely seems to be an Apothecary kind of thing.

To the point, yes and no. Acausal Intrusion are a new American duo composed of chthonic individuals known as Cave Ritual (drums, vocals) and Nythroth (guitars, bass, keyboards). Nulitas, the duo's debut full length via I, Voidhanger Records, was sent my way described as ''Avant-garde death metal,'' but truthfully this may be slightly misleading. Here it's more of an off kilter, technical death metal sound that dominates, heir to that wobbly, frantic style of riffing that legends like Demilich and Portal established. Arrhythmic guitar lines craft a whirlwind of noise around the drumbeats, generating an impression that can become quite imposing after a few listens.

Having been spoiled by the likes of Chaos Echœs, Howls Of Ebb, Imperial Triumphant, and others over the past decade, my standards for the Avant-garde in death metal can be a bit high. But even if Acausal Intrusion may fall slightly short on the weirdness factor with Nulitas, the album still ticks off many positive boxes as well. One of the most enjoyable aspects, as its artwork may imply, is the spooky sense of melody and dark ambiance, maybe not as pronounced as with some other bands, but definitely present, as on ''Transcending The Veil.'' There are some wicked catchy grooves throughout the album as well, usually coming in more towards the end of each track. The outro of ''Nexious Shapeshifters,'' for instance, is quite the banger.

The biggest setback with Acausal Intrusion's debut, however, is a feeling that these finer elements of the sound could have been both pushed harder and spaced out better. The songwriting is far from terrible, but as someone who's never been too big a fan of death metal where the guitar seeks to match the speed of the drums, I do think Acausal Intrusion focusing more on their groovy, midtempo approach going forward would serve to make their music a lot more memorable. Also, while the duo's more melodic moments can be quite effective, they normally come as either track intros or as interlude tracks. A track like ''Tetrahedron Quartz'' (easily the strongest), in which the ambiance is more evenly divided throughout the rest of the death metal raging, is the type of sound I'd like to see Acausal Intrusion explore more in the future.

Nulitas can be a bit of a hot and cold experience for fans of the more abstract forms of death metal. But while there's room for improvement in the compositional and production departments (up the bass and ditch that ringy snare, guys), there's certainly plenty that captures attention and deserves commendation as well. If Acausal Intrusion refine the before mentioned areas with subsequent material, they could well morph into quite the formidable beast. Overall, while Nulitas may be a bit underwhelming in some areas, it plants seeds interesting enough to warrant this duo being placed on the ''Bands To Watch'' list for the foreseeable future.

Written on 27.09.2021 by
Apothecary
Comforting the disturbed and disturbing the comfortable since 2013.
More reviews by Apothecary ››