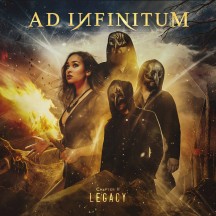 
I hear a lot of promise in Ad Infinitum, but Chapter II: Legacy isn’t the sound of them realizing that promise.

With many of the bigger names in symphonic metal either going on divisive musical journeys (Nightwish, Within Temptation) or undergoing line-up turmoil (Delain), there’s plenty of room in the genre for emerging bands to make their name. Two such bands that earned nominations in last year’s awards were Seven Spires and Ad Infinitum; although the former was more heralded across the online metal community, it was the latter’s debut record, Chapter I: Monarchy, that stood out to me as the sound of an up-and-coming band with real promise. The heavy Kamelot influence probably played a part in that, but beyond symphonic power metal, there was a more grounded heavy metal approach delivered with a sense of grandeur in many songs, as well as some effective poppier sensibilities. With the sophomore album coming shortly afterwards, I was looking forward to an opportunity to shine a light on a promising artist in one of our less-covered genres, but unfortunately Chapter II: Legacy has left me somewhat underwhelmed.

Ad Infinitum was founded by Melissa Bonny, with the project initially crowdfunded by Bonny. Therefore, the band is unsurprisingly her vehicle, and once again she gives a strong performance throughout. In addition to a powerful singing voice and good ear for vocal melodies, she has expanded her harsh vocal range on Chapter II: Legacy, with regular use of screams/growls, particularly on songs such as “Your Enemy”. This time around, however, Bonny isn’t the only vocalist; there’s a guest feature on “Afterlife” for Amaranthe clean vocalist Nils Molin, and this guest appearance may have indirectly helped me work out why this album isn’t clicking with me in the same way.

As I mentioned above, what I liked about Chapter I: Monarchy was the mixture of Kamelot-esque power metal, grandiose vibes when marching forwards at slower tempos, and successful pop inclinations in some of the vocal melodies. Well, with the sole exception of “Haunted”, there’s no real power metal here, and there’s not much grandeur to a lot of the songs, outside of the symphonic backdrop. Instead, the poppiness comes into sharper focus, specifically in a form not too dissimilar to Amaranthe; even without Molin’s appearance here, I imagine my mind would have gone to Amaranthe anyway when hearing tracks such as “My Enemy” and “Inferno”. Now, as I mentioned when reviewing Manifest last year, I don’t hate Amaranthe; I’ve found some of their earlier stuff to be worryingly addictive. Still, I don’t really see the benefits of venturing in this direction and abandoning the sense of purpose that made the likes of “Infected Monarchy”, “Marching On Versailles” and “I Am The Storm” leave such a good impression on the debut record.

It’s not all bad by any means; I’ve given Chapter II: Legacy a few playthroughs, and find it an easy enough listen that I mildly enjoy. If you are more inclined towards a pop metal sound, I think the quality for that style is pretty high here, with the likes of “Animals” and “Into The Night” having that polished catchiness one might expect from such a record. There’s also a few songs here that I do actually enjoy myself; in addition to the remaining hints of Kamelot on “Haunted”, some of that purpose from the debut record can still be found in the opening song “Reinvented”, and there’s quite a lot of heart in the ballad-esque “Son Of Wallachia”.

Ultimately, though, it’s an album that I only gave more than a cursory glance to because of the debut, and when placed alongside Chapter I: Monarchy, Chapter II: Legacy does feel a bit lightweight and throwaway. I do hope that Ad Infinitum manage to find a good balance between the strengths of that debut record and where they seemingly are wanting to go at present, because Melissa Bonny is a great vocalist and there’s enough evidence in the music they’ve released so far to suggest that they could go some way to filling the void slowly being left in female-fronted symphonic metal by some of the veteran names.