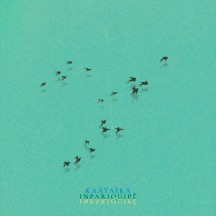 
Few things can feel as serene as this.

2020 was, in addition to being a generally awful year, an actually good year in terms of music. One of the biggest revelations of that year was learning that the person behind the Bríi project was actually the same as the person behind Kaatayra, namely one Caio Lemos. Both of them were Brazilian bands who pushed the envelope of black metal in some way. Bríi in the way in infused electronics and ambient, and Kaatayra with the Botanist-esque approach of acoustic instruments that switched up the frostbitten north for the warm and wet jungle. Both of Kaatayra's 2020 releases felt like revelations, and each of them felt like they were focusing on one aspect of the band's sound more, with Só quem viu o relâmpago à sua direita sabe being more folky and Toda história pela frente more black metal. 2021 saw a new Bríi record, a newly formed duo in Vauruvã, and now a new Kaatayra.

In my naivety, I thought this new one would just continue and polish the approach of the previous two, perhaps integrating them even better into a more cohesive acoustic black sound. So, I would wait and wait, but the black metal wouldn't come. Instead the same repetitive acoustic melody would play. And indeed, the black metal aspect of Kaatayra has been greatly reduced, mostly resting in the blast beats and the occasional shrieks. What is left of Inpariquipê is mostly that acoustic exploration from Só quem, but with an even more minimalist approach. The end result is something so far removed from anything that the "atmospheric black metal" tag usually indicates that it feels gleefully left-field. With its minimalist repetition reminding me most of a Steve Reich compositions, and its electronic synths shifting between Mogwai and Boards Of Canada, but with even more glee injected.

"Glee" is a word I've used specifically because I feel like it's a word that isn't often used to describe metal. And indeed, most of Inpariquipê isn't very metal, and its more metal moments are the least gleeful, but even at its harshest, it feels strangely soothing. It's such a warm wall of melodies that no shrieking can deter. The acoustic riffing and the tribal percussion just work together through minimalist repetition, genuine melodies, electronics and natural field recordings, and a slice of putting Caio's Brazilian heritage in the mix. It feels like something that could only exist in this specific set of circumstances that lead to someone looking at atmospheric black metal from a completely different angle and deciding that it can be completely deconstructed and built with new building blocks. And then deciding that those building blocks don't even need to build atmospheric black metal. They just need to build.

And, in a way, it doesn't feel warm purely because of its tropical atmosphere. But also because, unlike most of the black metal that distantly originated it, it feels welcoming.

Written on 02.12.2021 by
RaduP
Doesn't matter that much to me if you agree with me, as long as you checked the album out.
More reviews by RaduP ››