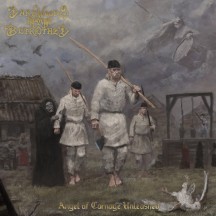 While Sweden is far from the first country you'd associate with constant wartime, our history spans over a millennium. Angel Of Carnage Unleashed documents the Great Northern War (1700-1721) between the coalitions of the Swedish Empire and the Tsardom of Russia. Yep, that’s 21 years of constant, brutal medieval warfare, ending with Carolus Rex getting his ass kicked trying to invade Norway, seizing Sweden’s sovereignty of the Baltic Sea to the Russian Empire. Spoiler alert: Denmark sold us out (again). It’s their fault, I swear.

For overly glorious depictions of this period of horrid warfare, however, go listen to Sabaton or something. Darkwoods My Betrothed have made the smart choice to portray the fall of the Swedish Empire from a unique, and much more personal perspective. How do you think the Swedish kings got all these men to fight for a country that was essentially occupying theirs? By force and religion, of course, and the lyrics on Angel Of Carnage Unleashed focus on the experiences of the Finns of the former fourth land of Sweden, Österland (Eastland, today of course known as Finland). Conscripted into military service, made to go to war for God (i.e., the king), and to act as a cosy buffer zone between Scandinavian Sweden and Russia… Well, the vividly gory lyrics on this album suggest it was not an entirely agreeable activity.

So, half of the band now consists of Nightwish members, making this album immediately more interesting to me, as it was the band that got me into metal (and music, in general). Moreover, Tuomas’ composing and playing inspired me to become a musician, and these days I (also) play keys in a black metal band, among other things. With Tuomas Holopainen (who played with the band in the 90s) on keys and Kai Hahto on drums, you don't need me to tell you that the quality of performance on this album is simply stellar. But, you'll probably ask me, to what extent does it sound like ”black Nightwish”? Well, stick around, and we might find out together, as I'm not entirely sure what to answer. Some of the best moments on Angel Of Carnage Unleashed do come off like extreme versions of good old Oceanborn favourites, such as the tasteful piano leads in “You Bitter Source Of Sorrow" being reminiscent of "Devil And The Deep Dark Ocean", the symphonic breaks in the progressive "In Evil, Sickness And In Grief" could fit on Century Child, and the distressingly ugly (this is a compliment) "Massacre" bring to mind the darker moments of Imaginaerum.

For the ones allergic to symphonic elements, this album… plot twist: contains enough ice-cold black metal that Tuomas’ keys are never overbearing, and you should give it a shot regardless of preconceptions. Oh, and I'm just going to state that the drumming on this album is simply stellar throughout and impresses me every time I listen. There's so much going on in the percussive department, I'm still hearing new fills and trills a dozen listens in, and the preciseness and creativity Kai displays on here rivals anything he did with Wintersun for sure.

“Name The Dead” opens the album with a priest or a general (or a priest-general, what do I know) citing a 1528 psalm by Martin Luther: “vår Gud är oss en väldig borg” (our God is to us a mighty fortress), before chaos ensues. There is great songwriting on display here, as the song twists through its (somewhat predictable) patterns to end on an intense note, landing in the orchestral intro to “In Evil, Sickness And In Grief”, which is the best song on the album. Martial symphonics are suddenly interrupted by a catchy yet raw riff of ascending chord progressions, as Pasi Kankkunen snarls “A man of war / Is man no more / Live this lie / Yet inside die”. “Massacre” is another definite highlight of the album, weaving creepy keyboards, serrating riffs, insane drumming, and high-pitched screaming (that I wish Pasi would have used more of, as it’s as disturbing as it is beautiful). War is never pretty, but the lyrics to “Massacre” really bring the point about medieval warfare home, portraying how the conscripts rape and pillage the shores of the Baltic, more for conquest than in defence: “Women’s lives are but meagre bribes / Bodies carved by more than knives / They have hung our priest up high / Ripped the children, watched them die”.

Sadly, the album takes a turn for the worse on the third track, where weak clean vocals and silly lyrics bog down an already uninspired Bathory B-side anthem, to the point it sounds like a not-drunk-enough-thus-mostly-boring Moonsorrow karaoke. It breaks the flow of the album terribly, and I’m not sure what went wrong, as the other anthem song, “In Thrall To Ironskull’s Heart” features Pasi in a higher register where his cleans sound great, and a progressive vibe and folky hooks keep my attention effortlessly.

With very visceral lyrics, a mix of brutally raw and melodically epic music, and just a few hiccups along the ride, Angel Of Carnage Unleashed is one hell of an entertaining album, only marred by some weird songwriting and performance choices, and the overly slick, modern production. Tuomas and Kai, focus your attention on Darkwoods My Betrothed from now on, will you? It sounds a lot more inspired than whatever… you know which band I’m talking about… has been up to lately.