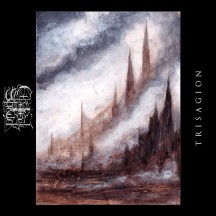 
A long-awaited follow-up that is also sadly a swansong? An atmospheric black metal colossus that really wins its runtime? Yes!

Ethereal Shroud's They Became The Falling Ash is pretty emblematic for mid 2000s atmospheric black metal, a time when the genre was still very fiery and willing to push boundaries. The album quickly became sort of a cult classic for how it pushed funeral doom into an atmospheric black metal form... or was it the other way around? Regardless, They Became The Falling Ash signature genre blend was something that was pretty unique, even amongst other attempts at blending funeral doom and black metal, like Nortt or The Ruins Of Beverast or Elysian Blaze. For the longest time it seemed like They Became The Falling Ash would remain this band's sole representative. Then the "Lanterns" single dropped, showcasing a new track, as well as a remastered version of the debut album, with promises of more new material around the corner. "Lanterns" didn't make it unto the new album, but Trisagion is a pretty meaty release nonetheless.

You know how you sometimes get thoughts that seem illogical and that you can't really properly explain? I was listening to Trisagion, and a thought came into my mind, something that made me sure that I was gonna review it, but something that I was sure I had no way of actually putting in a serious review. I don't know why, but I feel like years from now, people will look upon this album as the last truly great atmospheric black metal album. And I feel weird having thought that, since more than likely, I will still come upon atmospheric black metal albums in the future, and Joe Hawker, the man behind this project, will likely keep making music in some sort of similar vein, so it seems awfully condescending for me to say that. But at the same time, I can't think of anything other than this that really made me feel like I love this subgenre this year.

And I guess it makes sense that I connect the two. They Became The Falling Ash was more of a complete solo effort from Joe Hawker, but Trisagion is something closer to a band effort, at least performance-wise. since you have John Kerr of Noltem doing drums, and also Richard Spencer (no, not that one) doing bass, plus another guest vocalist on the first track. All of this, plus the many years that this was in the works, makes Trisagion less spontaneous, and more worked-out. But that's the deal. This is a release that completely understands what made all of this worthwhile in a way that I find really hard to put into words. All that I know is that you can truly feel how much Trisagion was a labor of love. It's both more grandiose and mature than what came from the Ethereal Shroud name previously, but it's hard to describe the massive three-track approach as anything other than "colossal" and "epic".

This is not black metal that is overtly emotional, and yet all of it just oozes of emotion in an effortless way. It's the kind of thing that feels very self-explanatory in its emotional impact. Like, of course Trisagion feels massive and impactful, and trying to put it into words would be like trying to explain that Synecdoche, New York is depressing. Like... of course it is! Hell, there's more tracks over 20 minutes than not! And yet, here I am, complaining that another track "Lanterns" didn't make the cut. And yet it makes sense that with such grand expectations, Joe didn't let anything but the very best make the cut. The entire result still feels pretty lean, which only serves as a testament to the staying power that these songs have had in the short timespan that they've been out. Which only makes it more saddening that this is the last we'll hear from the project under this name.

I'm sorry that I couldn't properly put things into words. Trisagion has been out for a while, but each listen defies me. It's not the kind of album I can just write about and move on with my life. It won't change my life the way They Became The Falling Ash, but it very clearly comes from the same creative mind. I'm trying to contain my excitement and be objective. But it's hard to be objective when music, especially metal, makes you giddy in a way you haven't felt in a long time. Whether or not Joe keeps making music with the Wisp project (that I covered here) or does something completely new, I'm almost ambivalent. All that I know is that I'm along for the ride. And that you don't need more than two album to set your place in stone as a future black metal classic.

Written on 20.12.2021 by
RaduP
Doesn't matter that much to me if you agree with me, as long as you checked the album out.
More reviews by RaduP ››