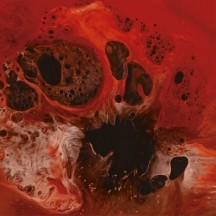 
You pass the Earth's destructive tectonic force through cold analogue machines and you get P.H.O.B.O.S.. On Bleaker Beater, you also remove all strings, leaving just the machines.

P.H.O.B.O.S. have been purveying industrial doom soundscapes for more than two decades. Initial attempts at a band left aside, P.H.O.B.O.S. quickly turned into Frédéric Sacri's playground, eager to continue metal's exploration into electro-industrial soundscapes, but with a colder "slow and low" approach. Godflesh and Blut Aus Nord are some obvious points of comparison, the latter of which being the only band that P.H.O.B.O.S. has released a split with, but the band itself puts it as "the deformed child of Swans and Bathory in dub, slowly howling". Ever since 2005's Tectonics, the band has purveyed a heavier-than-a-black-hole blend of industrial noise, doom metal, and black metal, a formula that felt perfected with 2018's Phlogiston Catharsis, an album that also saw Sacri bringing some outside collaborators. On Bleaker Beater Sacri is still joined by Mani Ann-Sitar, but the soundscapes decided that maybe their love for dub wasn't obvious enough.

The metal band doing a non-metal release is a pretty common trope already, but for P.H.O.B.O.S. it seems more like a logical conclusion. A lot of their music already tiptoed the line between industrial as an interaction between man and physical tools or instruments and industrial as man generating electronic music through computers, samplers, or other analog or digital machines; and with how unhuman P.H.O.B.O.S.' music has sounded, it's no surprise that it moved closer to the latter eventually. And by making the music more unhuman, they instead turn the themes more human, turning the attention from the macroscopic movement of the Earth to the microscopic movement of a human's blood. And indeed, it sounds like the sonic equivalent of having your blood turn against you.

I feel like I lack the electronic music background to properly assess just what goes into Phlogiston Catharsis, since just saying it's electro-industrial might not be enough. I obviously find a lot of similarities with Skinny Puppy and Frontline Assembly, or with illbient stuff like Techno Animal and Scorn, mixed with a more violent version of The Orb, coupled with some black ambient like Locrian and La Torture Des Ténèbres. But something tells me that if I asked P.H.O.B.O.S., they'd tell me that it all boils down to Lee Perry's work on Super Ape and King Tubby's Dub From The Roots. Thus Bleaker Beater follows a long lineage of electronic bass music, that's just as terrifying as it is pummeling. And the end result has big bass, creepy ambiance, and piercing noise. And that's all it needs.

Written on 22.12.2021 by
RaduP
Doesn't matter that much to me if you agree with me, as long as you checked the album out.
More reviews by RaduP ››