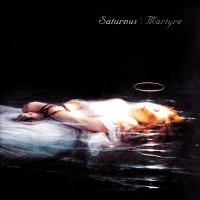 
Saturnus are a band that have been on the scene for a while now, and have made a huge impact on modern-day doom metal. Despite their discography only being relatively short to date, it is a flawless one in my eyes. Their second release Martyre is certainly no exception, as it is considered to be one of the best death doom releases of all time, alongside Veronika Decides To Die.

You will find nothing that sounds entirely orignal on this album, but Saturnus have their way of developing a fine balance between doom, death, and gothic metal, with beautifully constructed, melodic riffs that slowly flow with true doom metal fashion. Take the song "A Poem (Written In Moonlight)" for instance; although the riff is slow and could easily fall into the trap of becoming too repetitive, it has a haunting melody that builds up into a sorrowful atmosphere, in a way that brings on feelings of despair. With the heavy guitar tone and melodies, the sound is not too far off the Lake Of Tears album Headstones.

Martyre contains some phenomenal songs, the highlights for me being "Softly On The Path You Fade" and "Thus My Heart Weepeth For Thee", which are just two beautifully constructed and well written songs packed with heavy riffs, outstanding clean and harsh vocals, and melodies that bring out so much emotion. There is also a great use of acoustic guitar, like on the song "Thou Art Free". Just as the Old English song titles and lyrics would suggest, the album gives off a real medieval Shakespearean feel to it.

There are also shorter, more up-tempo songs, like the short and catchy "Lost My Way", and the equally short and heavy "Empty Handed". These tracks have a more clean and less harsh sound to them compared with other songs on this album. They sound very similar to Paradise Lost and Anathema, especially when it comes to the clean vocal style.

To me, Martyre is ideal for a cold, fresh autumn morning walk, when you're feeling a bit gloomy, but any fan of death doom in general should not ignore this album.