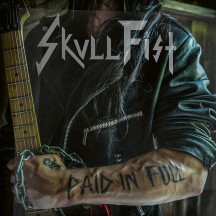 
Did the band name themselves after the Fistful Of Metal cover?

There must be something in the poutine or snow up there in Canada, for they have been producing some of the best OTT heavy metal bands since the turn of the millennium, with the likes of Cauldron, Striker and Riot City providing depth to a scene that has been producing great albums consistently. At the forefront of this are Skull Fist, perhaps the most bombastic, yet melodic of them all; to say this left me with high expectations for what is only their fourth album would be an understatement, yet it is one that Paid In Full meets, though not without moments where the band lose their way. Why is Skull Fist’s sound so addictive? Well, chuck Judas Priest, Helloween, Scorpions and NWOBHM into a blender (or maybe not, that could get messy) and you have a Skull Fist record and a recipe for success.

After hearing the opening title track you will likely think I’m lying, as straight out the gate the band open the album in boring and tepid fashion, not so much putting their best foot forward, but putting their foot forward and immediately slipping on a banana skin Mario Kart-style; on the bright side, things can (and do) only get better (for the most part). As “Long Live The Fist” kicks in, you are reassured that the band haven’t lost their touch.

While Paid In Full is perhaps their most inconsistent record to date, it isn’t unenjoyable, rather an album that seems to hit potholes here and there as the band blast ahead from beginning to end. This inconsistency mostly arises from the band easing down on the OTT elements on their sound and focuses on producing unremarkable hard rock tracks. The aforementioned title track, “Crush, Kill, Destroy” and “Madman” are the weakest moments on the album. While they mostly vary from boring to banal (title track and “Madman”),“Crush, Kill, Destroy” is a song that is better in concept than execution; not a bad song per se, but you can see what they were aiming for and they don’t pull it off as convincingly as you would otherwise expect.

It is when the band produce tracks that sound like bombastic NWOBHM on steroids that they hit their stride, with “For The Last Time” and “Heavier Than Metal” being their forte and something delivering just what you want from them. “Warrior Of The North” is the polar opposite of the title track, ending the album on a high note in contrast to the start of it, while “Blackout” features an addictive shredding solo from Schottler, who, in tandem with holding down the vocals with aplomb, takes up sole guitar work, owing to the departure of Nesta last year.

While five and a half (“Crush, Kill, Destroy” gets half a point) tracks out of eight isn’t a great hit rate for an album, those five tracks are solid and enjoyable enough to compensate for Paid In Full’s weaker moments (that, and skip buttons exist) and make the album a more enjoyable experience that it would otherwise be. Skull Fist are a band that deserve more recognition than they get, though I doubt this album is the one that will signal their breakthrough.