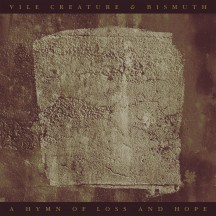 I've reviewed quite a bunch of Roadburn related albums lately. From albums that resulted from the livestreams of last year's Roadburn Redux, to collaborative surprises first performed at this year's Roadburn. And that's not even counting how many of them have yet to drop, making my life harder in case I'd have to review some of the ones that resulted from sets I haven't seen. But Vile Creature & Bismuth's A Hymn Of Loss And Hope was supposed to premiere at 2020's edition. And like most things 2020, it was pushed back. So it's no surprise that the piece's live premiere would be accompanied by its studio release.

It's a bit hard to differentiate a review of the live performance from a review of the album itself, not only because I've seen the live performance first, but because the live performance is pretty in line with the album itself (or, in my case, the other way around). Much harder to be surprised by the piano interlude when you saw a grand piano sitting there on stage, ominously reminding you that it will eventually be used. So sorry in advance if I'll use the exact same phrases in the concert review when that comes out. I also came into this more of a Vile Creature fan than a Bismuth one, since I had already seen them live at the previous Roadburn and I had already reviewed their latest album. Thus I was pretty mixed about the fact that A Hymn Of Loss And Hope seems to have a bit more Bismuth than Vile Creature, maybe more so in the live setting.

A Hymn Of Loss And Hope sits in a pretty sweet spot between sludge metal and funeral doom, barely ever upping the pace from more than merely plodding along ominously. The album does plod a little bit too much, and since it is structured as a single long piece, where dynamics are essential, it does lose some of its impact along the way. Yet, I can't blame the bands for realizing how much both of them thrive in the slower paces. Each band recorded its parts separately, but the album retains an organic feeling that doesn't betray that. Since both bands are duos, the expanded instrumental palette makes the sound fuller than what they'd normally do, and the vocal front's expansion also adds to the album's emotional impact. And it is that emotional impact that really turns the scales opposite of its plodding nature.

I did leave this one more of a Bismuth fan that I was prior, and I'm glad this finally came to light. About time people updated their "One track albums" lists.

Written on 30.04.2022 by
RaduP
Doesn't matter that much to me if you agree with me, as long as you checked the album out.
More reviews by RaduP ››