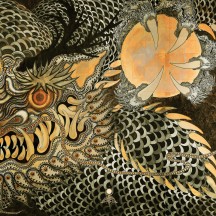 
I guess I'll have to review every Neptunian Maximalism live album from now on.

For context, I have already reviewed a live album from the band (among other things). I'm not one to really be that interested in reviewing live albums, since most of the time they're just live versions of songs you already know, but sometimes the format kinda transcends that by making the live album feel even more unique. This brand of jazz has always lent itself for live improvisations and explorations, so when a friend of mine asked ZAÄAR, an offshoot of Neptunian Maximalism, about their setlist for their recent Roadburn performance, the response was that there was no setlist, merely live improvisation. Set Chaos To The Heart Of The Moon has some sort of setlist, as one can recognize some of the tracks listed as having been part of previous albums, but it would be foolish to assume that they would be merely live versions of those.

The biggest differences between Solar Drone Ceremony and Set Chaos To The Heart Of The Moon are that the former was merely a single piece overextended and it was performed before Éons' release, meaning I had no idea who Neptunian Maximalism were at that point. In contrast, Set Chaos To The Heart Of The Moon is a larger spectacle, and it was performed at Roadburn Redux, the online version of Roadburn that took place in 2021. And since that was after I discovered them, and the performance was livestreamed, I was able to see it firsthand, at least as much as one can see a livestream. That's not the only album in this situation, though SCTTHOTM's video component currently seems to only be available on the sold out CD+DVD version of the album. Too bad, because that would have been the perfect companion. As it is, as merely a live album, SCTTHOTM still shows why Neptunian Maximalism thrive in the live setting.

None of the tracks suffer as great of a change as on Solar Drone Ceremony's sole track, but the seamless flow between the tracks and the large scale of the performance and their improvisational quality does make SCTTHOTM a pretty similar experience in terms of the full album listening. I simply cannot imagine this experienced in any other way than in full. The horns and the percussion remain clear highlights, even within the expansive sound palette. The opening track's use of wails and choirs is the closest thing to the madness of Bølzer's "Roman Acupuncture" since that happened. Though the drone metal aspect itself is not overly emphasized in itself, there's a great deal of heaviness that comes merely as a result of how massive the sound is. I don't want to oversell things, but I'm pretty sure I prefer the versions of the tracks here to their originals, and that's saying a lot considering how much I loved Éons. But the ante has been upped. I mean, even outside the Éons tracks, just listen to how heavy and groovy the new version of "Conference Of The Stars" is.

Now, I don't think I'll really be reviewing every one of their upcoming live albums, because I already trust that they'll be pretty splendid and they don't need me to state that. Now if only the orthography of the track titles on Bandcamp wasn't so obnoxious.

Written on 30.04.2022 by
RaduP
Doesn't matter that much to me if you agree with me, as long as you checked the album out.
More reviews by RaduP ››