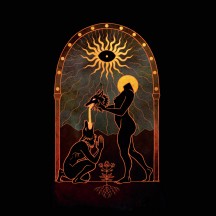 
For one night, Wolvennest became The Nest, by nearly doubling their lineup.

At this point you might already be familiar with Wolvennest, the metal-but-not-really-metal band that blends drone, krautrock, ritual ambient, atmospheric black metal, doom metal, to create a ritualistic psychedelic take on metal that we've been nominating quite regularly in our Ambient/Drone/Noise category for our Metal Storm Awards. Truth is, we're not so sure that's the best choice, but Wolvennest are so defiant of easy categorization despite having a very consistent sound. Back when I reviewed Void, their one album that actually won the votes in its category, I did my best to encapsulate Wolvennest's sound by namedropping Aluk Todolo, Bong, Dead Can Dance, Emptiness, Tangerine Dream, The Cure, Urfaust, and I still wasn't content that those would suffice.

All their subsequent releases got pretty favorable reviews, and from someone other than me, so it wasn't just me falling in love with their sound. I had already seen them at my latest physical Roadburn in 2019 (latest so far, ask me again in a few weeks), got blown away, but for the purposes of this review another Roadburn performance is important. You'll notice that I talk a lot about Wolvennest despite the fact that this is not actually a Wolvennest record. For the online Roadburn Redux of 2021, a special performance was commissioned, which would become The Nest's Her True Form. Thankfully, that performance can be watched in full below:

After Roadburn Redux, all the streams of the concerts were taken offline, and The Nest became almost like a fever dream, maybe because I didn't keep up with Ván Records' newsletter. And now, it's been put to the record. Which means there's two ways to look at it, how different is The Nest from Wolvennest, and how different is the studio version from the live performance.

The biggest obvious difference is the lineup. In addition to the usual Wolvennest members, all of whom participate here, you also have Primordial's Alan Averill, The Ruins Of Beverast's Alexander von Meilenwald, Dool's Raven van Dorst, Saturnalia Temple's Tommy Eriksson, all of whom provide their vocals, as well as Dread Sovereign's Bones on guitars. On the vocals side, each one of the collaborators gets a song to sing on, Eriksson on "Her True Nature" and "Vague à l'âme", van Dorst on "We Are One", Averill on "The Way Of All Flesh", and von Meilenwald on "Altar". And finally everyone participates in some form or another on "Le Feu". The last track especially stands out with its huge emphasis on percussion and ritualistic choirs, as it turns out that Averill can do some pretty mean throat singing. Deha still provides his fair share of vocals, but surprisingly not Shazzula. Of course, The Nest isn't special just because of its extended lineup, even if the increased vocal front does make the sound more expansive, as each guest brings quite a lot of their style into the mix, but there's an increased black metal presence as well, making the genre categorization even harder this time around. It being dark, ritualistic, hypnotic, and all those buzzwords should be of no surprise by now, but the wall of guitars is even denser this time around.

And the reason why it was so easy to tell who played on what was due to being able to see their faces in the live performance recording. Sure, I'd have been able to tell apart van Dorst on "We Are One" and Averill on "The Way Of All Flesh", but I'm not sure I'd know it was him doing that throat singing on the final track. And it's generally the live performances that are mixed worse than studio versions, but here they stand pretty equally, even though I feel like the live versions sound more organic and airy, while the studio version is denser. And that's considering the entire thing is dense by nature, with the wall of guitars, the keys and bass and percussion and voices that are layered and interwoven, and yet never feel cluttered. Hell, at this point The Nest could add another 5 members and they'll still probably sound perfectly well layered.

After giving this numerous listens and views, there's only one word that really lingers: massive.

Written on 04.04.2022 by
RaduP
Doesn't matter that much to me if you agree with me, as long as you checked the album out.
More reviews by RaduP ››