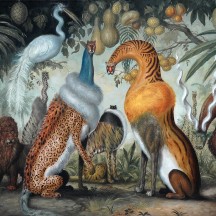 
Ok, maybe Neptunian Maximalism isn't really metal, but you could easily make that case for ZAÄAR.

In case I didn't get my point across properly, I mean that it's not metal. ZAÄAR is not metal, and Neptunian Maximalism is kinda in between. Why do I bring these two up? Because they share three members, meaning that there's more of ZAÄAR that is in Neptunian Maximalism than ZAÄAR that isn't. I couldn't find much about bassist Hugues Philippe Desrosiers and keyboardist Didié Nietzch's other endeavors, but even the other three can be found working or having worked in K-Branding, Eostre, Collectif Inaudible, and most importantly for our website, Sol Kia. ZAÄAR however would probably be of limited interest without the connection to Neptunian Maximalism.

That doesn't mean that ZAÄAR isn't good or it's not interesting, just that without the massive volumes of powerful drones akin to the ones on Éons, Magická Džungl’a's appeal is more niche and limited. It is tagged as a free jazz album, but even that genre is pretty varied and could lead to some false expectations. Yes, there's a lot of free improvisation and it is done in a jazz context, but a lot of Magická Džungl’a feels more like psychedelic ritual ambient drone, often times quite the opposite in terms of scope and volume to the drones on Éons. Whereas Éons was a gargantuan experience that has you expand with the universe, Magická Džungl’a brings you within.

It's a bit of to call a psychedelic drone jazz record as "personal", but in a way I guess it feels like less of a shared experience, but more of an introspective one, and as the band points out on the Bandcamp page, it aims to "awakes and stimulates ancient and forgotten senses, laying dormant since when humanity has been projected into the greyness of an industrialized reality, bringing the listener back to a time when everything was new and exciting and dangerous." So even if it has a lot in common sound-wise and scope-wise to Éons, with Magická Džungl’a also being a jazz behemoth with a huge runtime of 90 minutes, there's a reason why this had to be a different band.

It's less immediate, somewhat less eventful, with changes happening more gradually and the soundscape emphasizing immersion rather than being constantly engaging. In a way, it's an album that makes it very easy to zone out. And for an album with such a long runtime, perhaps zoning out is actually recommended. The sax and synths and percussion do keep things interesting, but the pace of changes don't make the attentive listen as rewarding as letting in into other parts of your mind. The minimalist approach is something that takes some getting used to without having previously been accustomed to it.

And as someone who has listened to far too few ritual / tribal ambient records, even among the many ambient albums I listened to, it's amazing to see just how an album can feel so simultaneously restrained and savage.

Written on 08.11.2021 by
RaduP
Doesn't matter that much to me if you agree with me, as long as you checked the album out.
More reviews by RaduP ››