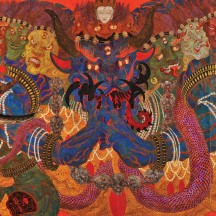 
This is a massive triple disc two hour long jazz album dripped in tribal psychedelia. Enter at your own risk.

This isn't the first time I reviewed a non-metal album for Metal Storm. We have a whole feature about that. I even reviewed non-metal albums on the main page. But the one closest to the task is this one in which renowned metal deconstructionalists Chaos Echœs who collaborated with free jazz saxophonist Mats Gustafsson to create a blood chilling atmosphere. And that is just the closest thing to Éons, and it still feels miles apart. Chaos Echœs were a metal band, as much as they ventured into unorthodox territories. Neptunian Maximalism could be called jazzy drone metal if you do an obscene amount of mental acrobatics to call it metal, but if they convinced I, Voidhanger to release Éons on their label, there's gotta be a reason why.

It's not metal, or if there is any metal in it, it's relegated to some distorted droning bass and guitars, but it makes up for it by having this heavy and disturbing atmosphere permeating this whole record. There are a lot of jazz albums that feel massive in a way that only jazz albums feel massive, but with its drone metal influences and its heaviness and inherent psychedelia (not the fun kind), it feels dark and massive in a way that is also specific to metal. It's Sunn O)))'s Monoliths And Dimensions but also Miles Davis' Bitches Brew, it's Earth's Primitive And Deadly, but also Electric Masada's At The Mountains of Madness, it's Naked City's self-titled, but also The Kilimanjaro Darkjazz Ensemble's Here Be Dragons. It's Pylar's Pyedra, but also Kamasi Washington's The Epic. Now that the namedropping is over, I can quite confidently say that Neptunian Maximalism can trace their lineage to stuff like Ornette Coleman, Sun Ra or Pharaoh Sanders in their brand of avantgarde jazz, but I still can't quite confidently say that Éons will remain in the history of jazz, but I can confidently say that for its entire duration it feels like one thing: massive.

Two hour long runtimes are a chore for pretty much anybody, so filling that time with something meaningful is a daunting task, hence why even some of the best avantgarde jazz albums, like Ascension, Jewels Of Thought or Journey in Satchidananda don't really stray over the 40 minutes mark. But having your album be of such an imposing runtime, especially if you can back it up, can immensely add to its appeal, just like it happened to the latest Paysage d'Hiver or that Spectral Lore/Mare Cognitum, where the listen itself transcends the comfortable into something that is more akin to a rite of passage. These aren't your everyday listens. One listen to Elysian Blaze's Blood Geometry feels like finally becoming one with doom metal. And that's what I can say about Neptunian Maximalism's Éons. Never throughout its daunting runtime did I feel like it wasn't going anywhere, or that it didn't add to the experience. It would feel much poorer if even one minute was cut.

With "Maximalism" in their name, one would expect Neptunian Maximalism to feel more... well... maximalistic. And even with a fairly vast array of performers on Éons, it never feels like it's throwing too much in your face at ones. Everything has its moment, you have to be patient, what matters is to create that otherworldly atmosphere. I do call this album psychedelic, but that is somewhat of a confusing term here. I can only suppose that this album would feel even grander while under the influence, but it feels like the only way to properly completely appreciate this album is to literally have an out of body experience while listening to it. I will continue to enjoy Éons from the confort of my own body, though, thank you very much, and Metal Storm is not responsible for any damage caused by the out of body experience the album itself may generate. So maybe psychedelic, otherworldly, transcendental, primal, spiritual are all descriptors that would fit Éons in some way or another, or at least one of the three discs. And of them point out to the experience evoking something that is no longer found in our life, something that is beyond us, something that is quite beyond our comprehension, and that we can only be in awe of and try to connect as much as we can to it, but we are far too logical and level-headed to do that anymore.

The division into three discs and their names are not coincidental either, with all three having their own distinct feel, through all of them operating in that dark droning jazz framework. The three celestial bodies that name the three discs have had immense religious and spiritual significance to humans throughout history. They were Gaia, Selene, Helios, Máni, Volos, Nanahuatzin, Soma, Ra, Metztli, Wi, Surya, Sól, Dhara, -emyna and many more. For millennia, man has worshiped the earth, the moon and the sun, and for him those had life beyond his. And though today we (perhaps rightfully) laugh at people calculating the influence their position on our birth day have on our personality, it's undeniable how much these three our tied to our spirit. We live on one of those (unless you're reading from the International Space Station, in which case you're still orbiting the Earth, you nerd), and it would not be hospitable for life without the other two. I could talk about some differences in sound in between the three discs, but I think the realization of the link between these celestial bodies and our spirituality is more significant towards the proper enjoyment of this album, because this is what I feel when I listen to the album.

This is one of the albums that remind us of why music has such a grand place in our human experience. Why we dance to, close our eyes to, and create this music in the first place.

Written on 01.07.2020 by
RaduP
Doesn't matter that much to me if you agree with me, as long as you checked the album out.
More reviews by RaduP ››