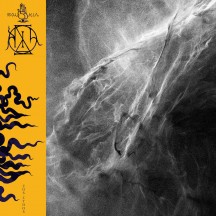 
Ok, maybe Neptunian Maximalism isn't really metal, but I'm not sure how you could make that case for Sol Kia.

In case I didn't get my point across properly, I mean that it's metal. Sol Kia is metal, and Neptunian Maximalism is kinda in between. Why do I bring these two up? Guillaume "Balls To The Walls" Cazalet. Multi-instrumentalist extraordinaire. And while he shares the laurels with a bunch of bandmates in Neptunian Maximalism, he handles all instruments in Sol Kia. And not only that, but he made a solo drone metal record, and an offshoot of his main band will release a free jazz record. So quite a busy man. In Sol Kia he is joined by vocalist Stephane Van Tricht. This one is too coming through I, Voidhanger records.

And when I said that Sol Kia is metal, I don't mean it's really metal. Ok, sorry, I have lied again. Neptunian Maximalism was heavy, mostly because of its downtuned guitars, baritone horns, drone influence, and loud volume. But it was mostly a jazz record, albeit a very metal one. Sol Kia is the opposite. I has psychedelic production, prolonged ambient sections, avant-garde sensibilities, post-industrial soundscapes. But it's mostly a black metal record, albeit a very infused one. If I squint my eyes really hard I can almost see why it's blacklisted on metal-archives. But then again, most metal is blacklisted on metal-archives. For a black metal record that is a spinoff of the biggest jazz metal colossus of the past decade, Zos Ethos has surprisingly little jazz in it.

And for an album with such a adrenaline filled start, more akin to a rocket setting off to space with an explosive start, a lot of the time spent in space is, like time spent in space usually is, quite psychedelic. Electronic experimentation, eastern tinges, wild synths, everything from blood curdling screams to persuasive whispers. Zos Ethos is like a soup. It feels like what the primordial soup would sound like, a soup from whence metal and noise and electronica and all things heavy, psychedelic, and brain melting came. I know I keep telling you that this is a metal album, and then I tell you that it's not, but that's because I'm at different parts of the album when I write this. And each time it's doing a very good job of convincing me of how wrong I am. I am still wrong, and I don't know how.

Written on 25.10.2021 by
RaduP
Doesn't matter that much to me if you agree with me, as long as you checked the album out.
More reviews by RaduP ››