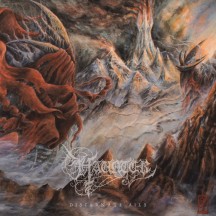 
01. Overgrown With The Moss
02. Spiritual Illness
03. Chained At The Helm Of The Eschaton


Haunter are pretty great at doing blackened disso-death, but they're even better as a country backing band.

I first got to know Haunter through Apothecary's review of their previous album, 2019's [Sacramental Death Qualia. At that point, Haunter had already had quite an evolution. Starting out as a screamo with some blackened tendencies on 2014's He Who Jumps Into The Void Owes No Explanation To Those Who Stand And Watch before morphing into black metal with a few of their early punky undertones on 2016's Thrinodίa, and finally the mix of sounds that they still currently explore. And also being part of Calico Bonnet, who I can't wait to finally make it to the full-album stage. Now Discarnate Ails isn't fundamentally different from it's predecessor, but there's still some shifts in sound going on.

The most obvious thing is that Discarnate Ails is a leaner album, a full 15 minutes shorter than its predecessor, sharing its runtime between three tracks ranging from 6 to 15 minutes. Long songs are already standard fare for Haunter, but the reliance on them here puts a lot more emphasis on their progressions and the dynamics in the tracks. As their sound already leans a bit more on the death side of things than their earlier black, a lot of the dissonant and progressive sides of their sound can be compared to either early Opeth or Ulcerate, mixed with something like the Deathspell Omega-worship of the early 2010s Icelandic black metal scene, thus a sound that's situated in a black/death/prog triangle.

A lot of sections have a very angular odd-ball feeling to them, coupled with some transitions that feel a bit haphazard, does make Discarnate Ails a bit of a challenging listen at times. The use of dissonance is not particularly new at this point, and disso-death is already becoming quite saturated, but there's still some creativity in how off-kilter its use here can get. And probably Haunter's winning combination is the fact that they tackle this disso-death sound a bit more from a prog death angle than a tech death angle, giving the maelstrom of riffs a more purposeful taste. The sprinkles of melodic solos and choirs do add some nice contrast to the chaos of their most furious release to date.