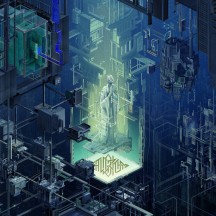 
The Algorithm is five iterations deep and outputs another solid record.

The French synthwave scene has well-established connections with the metal scene; both Perturbator and Carpenter Brut have played in metal bands, and elements of that past can be heard in their music. The Algorithm, the project of compatriot Remi Gallego, exists closer to metal on this spectrum, using gnarly guitar tones and heavy drums to intensify slick cyberpunk electronic tracks. Data Renaissance is less firmly entrenched in metal than 2016’s aptly named Brute Force, but it serves as another testament to the allure of The Algorithm’s stylistic synthesis.

When I described The Algorithm’s music as ‘slick’, I feel opening track “Segmentation Fault” has an intro that exemplifies that, with smooth beats and a bouncy, oscillating lead motif; later, that mellowness is replaced by an urgency, as Gallego ups the ante with the tempo. These fast-paced synthwave sections have an intensity and a coolness to them that already elevates a lot of Data Renaissance above the large majority of the synthwave albums I’ve sampled in the past couple of years, but when thick djent grooves thicken out the base of key segments, that gets taken to another level.

In contrast to the example set by certain noteworthy moments on Brute Force, the metallic side of The Algorithm is almost entirely percussive on Data Renaissance; the deep tonality does not lend itself to melodies or hooks. Instead, this responsibility falls on the electronics, and Gallego dabbles with different styles, from the jagged, off-kilter patterns that sustain the contorted midsection of “Interrupt Handler” to the angelic shimmers that float in and out of “Object Resurrection”.

The role of the metal on Data Renaissance is primarily to provide texture, weight and energy to the heavier parts of the album. It’s not that guitars are entirely needed for this; the electronics themselves can be very gnarly and headbang-worthy. However, the way that the introduction of “Decompilation” evolves provides a fine example of why the fusion of sounds can work so well; an already tasty groove is taken to another level when metal drums and guitar start pounding away in tandem. The dubstep drop later in this track provides another opportunity for Gallego to make something heavy, and then make it even heavier, and the conclusion to this track is irresistible in its groove and density. Other tracks that highlight the potency of The Algorithm in attack mode include “Readonly” (comprising a vicious early-record one-two with “Decompilation”) and the recurring rolling groove in “Object Resurrection”.

Still, there’s more to Data Renaissance that aggression. “Cryptographic Memory” aspires towards the grandiose with its choirs, echoing drum sounds and deftly layered synth melodies, while “Multithreading” plays around with glitchy rhythms and fluctuating motifs, at least until the djent arrives and delivers a more regular sense of rhythm. Nevertheless, that undercurrent of intensity never truly disappears; even on a track as eager to explore moments of stillness and emptiness as “Oracle Machine” doesn’t escape the intrusion of thick bass pulses from time to time. The way the album flows between synthwave, other forms of electronica and metal is fluid, and ensures that both individual songs and the album as a whole offer a satisfying journey.

The Algorithm doesn’t offer the most mind-bending collision of metal and electronica; the electronic side will be very familiar to synthwave fans, while the metal is a tool for emphasis instead of anything else more complex. Still, it’s a compelling fusion, and Data Renaissance is a really enticing example of how Gallego synergistically combines his musical passions into something greater. I feel the album is perhaps slightly let down by closing track “Inline Assembly”; considering the title track, which immediately precedes it, is arguably the highlight of the record, serving as a culmination of everything the album has been building towards, “Inline Assembly” ends Data Renaissance in slightly irritating fashion, assaulting listeners with unnecessarily prolonged passages of hardcore techno bass kicks. It’s an odd way to end the album, and it’s one that some may choose to pass on; however, excluding that track, I think Data Renaissance is a solid and very satisfying record from The Algorithm.

Written on 02.06.2022 by
musclassia
Hey chief let's talk why not
More reviews by musclassia ››