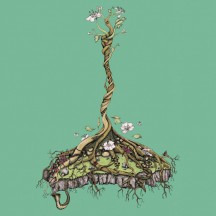 
Sergeant Thunderhoof is due a promotion, if This Spectred Veil is anything to go by.

Somerset’s Sergeant Thunderhoof have been quietly (well, perhaps not quietly) plugging away for the best part of a decade, exploring ancient mythology of southwest England across their albums. Given that this is a region associated with druids (Stonehenge is just over the border from Somerset, for the non-Brits among you), it seems appropriate that this mythology is explored musically in stoner metal form. This Sceptred Veil, full-length album number 4 or 5 (depending on how you count the acoustic interpretations of their earlier material compiled into 2020's Delicate Sound Of Thunderhoof), is perhaps their most ambitious yet; recruiting Phoxjaw’s Josh Gallop to produce it, Sergeant Thunderhoof have packed this record with nigh-on 70 minutes of music.

While every song on the album easily falls under the stoner/psychedelic umbrella, there’s a decent amount of variety across the record while remaining in that musical sphere. “You’ve Stolen The Words” kicks things off on a somewhat doomy front, albeit more so due to the tempo and vocal style, as there’s a more mellow tone to this track compared with the crushing distortion many stoner doom bands unleash. This mellowness grows in the second half of the song, as Sergeant Thunderhoof move away from big, heavy riffs in favor of a more atmospheric, contemplative approach, replicating the vibe of bands such as King Buffalo, as well as taking some cues from post-rock. In contrast, “Devil’s Daughter” is very much built in the classic desert rock template, with a driving energy to it despite not going particularly fast.

There’s a sense of a ‘different strokes for different folks’ approach to songwriting for this album; by covering a spectrum of niches within an overriding genre, it’s likely that at least a few tracks here will appeal to anyone with a taste for anything related to stoner rock/metal. However, at the same time, it might not maintain a lot of people’s interest for the entirety of its runtime. Personally, I struggle a bit with the middle stretch of this album from “Woman Call” to “Show Don’t Tell”. My lack of engagement with the former, a plodding, groovy heavy rock cut, comes down mostly to a chorus that I really don’t click (although this track, in conjunction with “Shockwave” from the recent Anvil album, has me questioning my appreciation of the cowbell). "Woman Call", as well as “King Beyond The Gates”, which is a slick psychedelic cut with some tasty guitar jamming that is only perhaps guilty of running on for too long, still have quite a bit about them that I can appreciate, and I understand anyone who enjoys them without reservation. On the other hand, I feel like “Show Don’t Tell” is more likely to rub others than just me up the wrong way; I can’t say I ever contemplated what a stoner rock/Mötley Crüe crossover would sound like, and now that I’ve heard it, I’m not convinced it was a good idea to bring those two ideas together.

However, there is a reason I’m reviewing this album, and it’s because, when the album is on form, Sergeant Thunderhoof sound pretty darn great. “You’ve Stolen The Words” is a really nice intro, and “Absolute Blue” takes the subtle emotionality of that track and turns it into the primary focus, with Dan Flitcroft’s tender, heartfelt vocals and lyrics making an impact while the softer guitar tones create a really solid backdrop. The album’s pièces de résistance, however, are the two big epics, “Foreigner” and the two-part “Avon & Avalon”. In keeping with the sentiments I’ve already hinted at in this paragraph, I find myself most taken with Sergeant Thunderhoof when they expose a tenderness; “Foreigner” starts off normal enough with some up-tempo drumming and chunky stoner doom riffs, but partway through switches into a very melodic, sadness-tinged emotional epic, vocals and instruments working excellently in tandem to really nail this shift in tone. “Avon & Avalon” starts off in this same kind of vein, before evolving into a more psychedelic but no less entrancing long-form heavy jam, featuring most of the record’s best solos.

My main takeaway from all of this is that, when Sergeant Thunderhoof go in more atmospheric, emotional or blissful directions, they can really draw you in and make a real impact; on the flip side, the more rowdy or fun material leaves me a bit underwhelmed. Having made similarish comments when reviewing The Singularity by Wo Fat recently, this might just be a reflection of my tastes, although there are enough desert rock and rowdy stoner metal bands that I do like for me to feel reluctant to pin all the blame on myself. Given the length of This Spectred Veil, this inconsistency tempers my appreciation of it a bit, but there’s more than enough evidence here to show that Sergeant Thunderhoof are serious business.

Written on 09.06.2022 by
musclassia
Hey chief let's talk why not
More reviews by musclassia ››