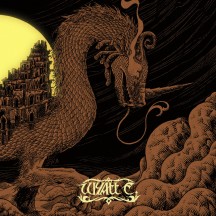 
Believe it or not, this band is actually not writing about the great outlaw of the American West and his infamous train robberies.

Are you disappointed? Well... too bad if so! Despite their name, the Belgian duo of Wyatt E. couldn't possibly be more removed thematically from the life and times of the real - life Wyatt Earp. Instead, on Al Beluti Daru, their second full - length album, we find ourselves greeted with an album cover depicting a great dragon perched amidst ancient - looking ruins, and there is also a track called "Mushussu." To the student of Mesopotamian history, this would serve as a strong hint that Wyatt E. are taking a cue from the land of bygone Babylonia for this one.

And what type of music would be most suitable for the creation of a "Babylonian atmosphere"? Well, in the opinion of Wyatt E., it comes down to a peculiar fusion of drone, neofolk, and psychedelia. On Al Beluti Daru it can often be difficult to determine where the line is drawn between these three, but that " hard to define" nature of the music is a reality that serves to make it all the more alluring. It's arguably the neofolk that's dominant over the drone and the psych though. During their last period of international touring, Wyatt E. had the privilege of playing in Israel, and this quite likely had a musical impact upon the duo, as Al Beluti Daru is replete with several instruments (strings? horns? something else) of the Semitic lands that help to create a thick, otherworldly ambiance.

But perhaps ironically, while it's the folk instrumentation that's most notable here, on Al Beluti Daru the most important ingredient in the composition overall would have to be the bass. Serving as the vital, indispensable glue holding everything else together, on both tracks it rumbles along for over 18 minutes with its steady, clearly audible line, confident and unwavering. It is upon this foundation that the rest of Wyatt E.'s songwriting is really built, the strings, horns, percussion, everything else, and with this technique the duo prove themselves as highly talented in the art of compositional layering. The bass also has an underlying heaviness and repetition to it that helps to give the music an additional, doomy kind of gravity that serves to make Al Beluti Daru much more than a simple neofolk album.

With its curious fusion of Middle Eastern folk techniques, hazy, drone - like guitar feedback, and pulsing bass that gives it added weight, Al Beluti Daru offers a fairly unique listen by the standards of folk and ambient music. With its subtle wandering into the realms of doom metal and heavy psych, it's also one of those albums whose status as metal is highly questionable, and is thus likely to appeal to fans of both metal and nonmetal alike. Perhaps most importantly, at just over 37 minutes of runtime, it really doesn't overstay its welcome, and is much more likely to leave a listener asking for more than begging for it to stop. With Al Beluti Daru, Wyatt E. have crafted a mesmerizing journey that not only showcases their compositional prowess but that is just short enough to tease wonderfully for their future material as well.

Written on 17.06.2022 by
Apothecary
Comforting the disturbed and disturbing the comfortable since 2013.
More reviews by Apothecary ››