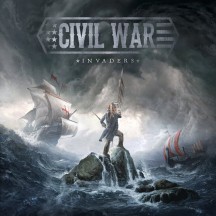 
Civil War’s fourth album defies expectations not only by its very existence, but by its dynamism and spirit – although I have been tempted for the sake of gripping emphasis to describe Invaders as a “resurgence,” which it is from a certain perspective, it is more accurately the first proper surge I have heard from this band.

One of the selling points for Invaders is that it is Civil War’s first album with ex-Sabaton guitarist Thobbe Englund, which is amusing when you consider that this band originated as a Sabaton offshoot, but is simultaneously cautionary: even my own unflagging enthusiasm for Sabaton uncharacteristically waned earlier this year. While my affection for Sabaton will certainly recover from the stubborn disappointment of The War To End All Wars, Civil War never broke the blockade around my heart to begin with; when the band launched immediately post-Carolus Rex and indicated its loyalty to the easy-listening metal brand, it seemed like a lineup with potential. That lineup yielded a debut EP that merely hinted at more potential still waiting to be catalyzed, then a full-length pockmarked by filler, and then a second album so unadventurous that it earned one of my least enthusiastic reviews to date. When The Last Full Measure hit the boards in 2016 and lived up to its fatalistic title, it was the end of my interest in Civil War.

It seemed to be the end of the world’s interest in Civil War for a while, too; guitarist Oskar Montelius abruptly quit not just the band but music altogether in 2015, and vocalist Nils Patrik Johansson split the following year shortly after the release of The Last Full Measure. In 2021, guitarist Rikard Sundén was convicted of child molestation and possession of child pornography, which spelled a swift and ugly end to his career. It was no surprise that the band sank into a period of inactivity following their third album, and with the pandemic quickly dousing any embers of life that remained and Sundén’s arrest forcing the music from everyone’s minds for a while, few would have blinked if Civil War had folded up and vanished into the pages of history.

Instead, the band regrouped and scored a major victory by joining up with Kelly Sundown Carpenter, vocalist of Darkology, Outworld, Epysode, and others. While Johansson is a talented singer, inevitable comparisons to Joakim Brodén made him seem a less favorable fit for stomping pop metal marches – I find his raspy, Dio-esque cleans better suited to the fantastical folk/prog of Wuthering Heights, somehow too mellow for Civil War’s forward volleys of melody. Sundown, on the other hand, can match Johansson’s aura of authority, as well as his range, but with a much harder, tenser, and more aggressive delivery; his powerful, gravelly voice is reminiscent of Jørn Lande and Tim Aymar, and the force he can muster pushes Civil War out of its mushy, mid-tempo mist and into the tempestuous, stirring choruses that it always hoped to achieve. Though I was disappointed to see Sundown leave Darkology, it seems that he can draw out Civil War’s latent power. Listening to the sharpness and intensity that he brings to tracks like “Andersonville” and “Dead Man’s Glory,” I feel confident that Civil War has found the charismatic field commander it needed.

Musically, of course, Civil War hasn’t changed much – you’ll remember from albums as far back as Primo Victoria the portentous heft of simplistic, keyboard-girded heavy metal riffs. Studded with familiar hooks and adhering dutifully to the verse-chorus-verse structure, this sound is designed to excite, and for once, it truly does; some of it is certainly due to Sundown’s presence, some of it is perhaps due to Englund’s new influence, and some of it must also be attributed to the sturdiest production that Jonas Kjellgren has yet bestowed upon the band. However it is that these factors and others flowed together, Invaders is characterized by a boldness and dynamism hitherto unheard from Civil War. Keyboardist Daniel Mÿhr strikes out for some more variety in his parts, searching for complexity behind the mandatory offbeat stings and choral effects that ramp up to every refrain. The guitarists, likewise, employ a heavier, more punishing tone than past albums enjoyed – the little techno breakdown in “Heart Of Darkness” has a djenty whine that may be the most intense moment to feature on a Civil War album.

Even the backing vocals stray further away from the bog-standard open-vowel choirs we’re used to; at the most basic levels of songwriting, Invaders represents an entirely new level of confidence and prowess for Civil War. At last, instead of sounding like an extraneous Sabaton clone, Civil War can compete seriously with contemporaries like Gloryhammer (“Dead Man’s Glory”) and Beast In Black (“Carry On”). “Battle Of Life” even steps away from history to tackle everyone’s toughest fight: life itself. It seems that Civil War has matured on all fronts in those fraught years of absence; I had never expected to speak so fondly of their new album, but Invaders is what I always wished to hear of this band.