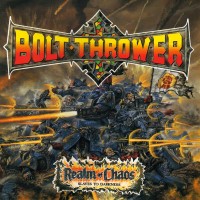 
Water drips down from unseen stalactites as a voice from the underworld growls:

"On countless worlds, the earth shakes
as the forces of chaos strive to gain control.
Whilst they unleash their devastating weaponry
upon their foes, there is no time for peace
Only eternal war..."

The words echo through the cavernous space, dissipating into nothingness - a void that is suddenly filled as pure, unhinged death metal comes flooding in!

Death metal: one of the cornerstones of the modern metal scene. Although progressively inclined bands have since its inception shaped and molded the style into various enjoyable incarnations, there remains something charming about its original form - labeled today as "old school death metal". Invented by Death (or Possessed, depending on who you ask) with their debut Scream Bloody Gore, this genre took the foundations of thrash and made all elements darker. The vocals were reduced to growls, the technical guitar solos were replaced by simplistic riffs, and there were no lyrics so vile as death metal's.

Among prominent names like Morbid Angel, Autopsy, and Pestilence, one quintet hailing from the UK released on October 28, 1989 the album that I regard as the Reign In Blood of death metal: Bolt Thrower's Realm Of Chaos.

Formed in 1986, Bolt Thrower have always been somewhat separate from the pack, in a way. They were one of the few early death metal bands to emerge outside of the genre's blooming centers in the US and Sweden. While most bands reveled in lyrical topics of gore and disease, Bolt Thrower chose to show the horrors of war, opting for lyrical themes of valor, honor, and pride. And yet, at the forefront of this new genre, Bolt Thrower were setting the benchmark with the heaviest riffs to grace the planet.

Now that you've had enough context, let's see about this album. Where were we? Oh, right -

"Eternal War" does exactly what any great opening song should do, setting the tone, giving the audience a taste of what furious musicianship is to come. And what more elegant way to show exactly what they're made of than dishing out the aural equivalent of a punch in the teeth! A groovy, badass riff grips you by the throat as you hear the menacing growls announcing mankind's peril. Immediately afterwards, the pace picks up tenfold as you're hit with an onslaught of blast beats and finally consumed by the chaotic whines of guitars screeching through the night... Congratulations! You've just lasted two minutes.

Now, I mentioned earlier that this is the death metal equivalent of Reign In Blood - and for good reason! Just like Slayer's classic album, Realm Of Chaos never gives you a chance to breathe. The series of two- to four-minute-long songs merge together into a single roller-coaster-ride from Hell. But, just in case you'd find this style tedious and, after a while, boring, Bolt Thrower keep your attention as each song alternates between ultra-fast aggression (like on "Through The Eye Of Terror") and groovy mid-tempo melodies (like on "Dark Millenium").

Also, like Reign In Blood, the standout tracks are at the beginning ("Eternal War") and at the end ("Realm of Chaos"). However, Bolt Thrower one-ups Slayer with the absolute highlight sandwiched cozily in the middle of the tracklist: the gargantuan, galaxy-crushing "World Eater"! Almost as if the band had realized what mighty magic they had crafted here, the song takes its time to revel in the simplistic yet unbelievably effective riff that fills the intro of the song, before the band dive back into a rampage of light-speed aggression. This song became such a fan-favorite, in fact, that their future albums would repeatedly pay tribute to it by featuring the same closing riff in the songs "Cenotaph", "Embers", and "The Killchain".

The fast-paced energy, the focus on meaty, badass riffs, the war-themed lyrics - all this was already introduced in their 1988 debut In Battle There Is No Law. But, as with all great sequels, Realm Of Chaos perfects this Slayer-influenced style, sharpening and honing their wicked musicianship into a lethally addictive weapon.

While Realm Of Chaos mostly benefited from the Reign In Blood features, it also inherited that album's drawbacks. I personally don't like the chaotic, ear-splitting guitar solos that, for example, feature prominently on the songs "All That Remains" and "Drowned In Torment". I understand that the screeching sounds are meant to mesh with the wild energy, but I've always found them more distracting than adding to the immersion. Bolt Thrower are at their best with the merciless, down-tuned riffage and the deep, growling vocals. Perhaps realizing this, they would go on to completely abandon the Kerry-King-eque solos after their third album, Warmaster, choosing an approach more akin to doom than thrash. This new direction solidified a unique style for Bolt Thrower that would prove to be one of the most consistently successful formulas in metal's history. Slowing down the pace of their songs in no way meant that Bolt Thrower would lose their drive - on the contrary, with albums like The IVth Crusade, …For Victory, and Those Once Loyal, the plodding, earth-shattering riffs became more brutal than ever before.

Despite many fans preferring the later progression of Bolt Thrower, Realm Of Chaos remains a fun, addicting, musical gem, encapsulating all of old school death metal's beloved attributes in a mere 30 minutes. Laying the foundations of a marvellously consistent discography, establishing the sound and style of an entire genre, this combination of devastating growls, signature guitar riffs, and crazed rapid-fire energy make Realm Of Chaos an essential classic in the history of metal.

Bolt Thrower, we salute you!