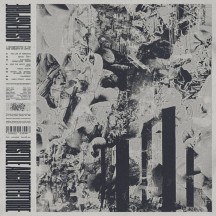 Uh-oh, we have some political music here, which is bound to not appeal to people who are accusing Rage Against The Machine of going woke. Making music overtly political is something I more often associate either with very milquetoast and vague "politicians bad let's rebel and be free" (though I agree that's not very overt) or with a bunch of hardcore punk, hip-hop, and folk. Or, if we're talking about black metal, an entire subgenre about how genocide is ok. RABM is the polar opposite of that, and though some of it is not taking itself too seriously, it is still a branch of metal that is expanding. Ashenspire have always been overtly political, even if by always I mean on the only other album they have, though Hostile Architecture feels even more striking in that aspect.

I could just talk about Ashenspire's musical aspect, and about the A Forest Of Stars comparisons, but Ashenspire have went above and beyond to hammer in just what the album is about. I'm not generally compelled to check lyrics, but I did in this instance, even if it's not really the kind of album where the vocals are intelligible, I just suck at paying attention to these kinds of things. I could also (and I will) just fill this review with some of the hardest hitting lines like "Always three months to the gutter. Never three months to the peak. Another day to grind your fingers for the simple right to eat." or "With the workers bleeding, the horse is beaten. God forbid that you should ever want a home." and ending everything with "Get down off the fence before the barbed wire goes up.". Some of these lines have chorus-like emphasis and repetition, and Alasdair Dunn's passionate and theatrical performance really makes it hard to not pay attention to the lyrics and to avoid it sounding too tacky in its preachiness.

Musically, A Forest Of Stars is still probably the best term of comparison, with its theatrical take on this sound. Though "this sound" is technically black metal, it is the kind of black metal that went avant-garde and progressive in the mid to late 90s that almost left all black metal roots with bands like Arcturus, In The Woods..., Dødheimsgard, and with touches of bands that followed on that sound like Code, Vulture Industries, as well as but not directly related to that prog black metal wave being the most theatrical band of all time, Devil Doll. But Ashenspire is more than just the most overtly political iteration in this long line of prog black metal. A much leaner take this time around, Hostile Architecture also perfectly incorporates violins and saxophone and even some hammered dulcimer (courtesy of Botanist' Otrebor) that offer some more frenetic palette expansion.

Despondent flows and desolate atmospheres are not just the result of that palette and Dunn's fiery performance, but the entire album is structured to flow and expand its emotional impact with an almost post-metal like sense of progression attached to the prog black metal sound, making even the instrumental songs/moments maintain the impact even without the lyrics. And I keep saying prog black metal or avant-garde black metal, but there's very little actual black metal save some some of the riffing and some of the atmospheric emphasis. I'd almost say that there's more jazz in this than black metal, and it's not just because of the saxophone (everybody knows that having a saxophone means being jazz), but the drumming also has quite a jazzy sense to it, and the entire thing also reminds me of something like Irreversible Entanglements.

It is the kind of album that I'd wish caused more of a paradigm shift than it probably will, both in how well it tacked a fairly well established avant-garde black metal sound, as well as in how to make overtly political music without making it too vague or tacky.

Written on 21.07.2022 by
RaduP
Doesn't matter that much to me if you agree with me, as long as you checked the album out.
More reviews by RaduP ››