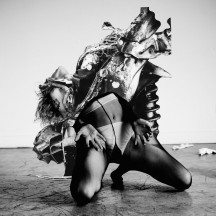 
I hope you like your industrial metal to have a bit of an alternative edge at times.

While there is far from a singular industrial metal sound, you still automatically think of cold and mechanical. From Godflesh to Rammstein to the adjacent cyber metal of Master Boot Record. They're all cold and mechanical. And crushing. I even made fun of the fact in my review of the latest Author & Punisher. But there's still plenty of variety within it. All kinds of metal-ish music that relies on electronica gets lumped in with industrial metal sometimes, stuff like Neurotech, while the genre has also blended quite well with black and doom metal. But probably the most famous of the branches are the ones that are at the border of electro-industrial and industrial rock, the kind that might not get an actual metal pass. This is the zone that Black Magnet inhibits.

James Hammontree's Black Magnet project doesn't reinvent the wheel in terms of industrial rock / metal music, and you can find soundalikes for pretty much any song here, all of which come from a range of late 80s - late 90s stuff like Ministry, Godflesh, Nine Inch Nails, Static-X, and Skinny Puppy while also having a touch of some more modern stuff like Author & Punisher, Youth Code, and Street Sects. Is it entirely original? Not really. If anything it sounds a lot more like Ministry than anything else. But the way that Black Magnet tackles this sound that feels both like a blend of various nuances and a singular historic sound has plenty of merit.

For one, it sits at a pretty neat intersection of metal, rock, electronica, and noise. They're not equal shares, but they create a sound that never relies too heavily on a single element. Because of it, it evades being the kind of album where the songs would blend into one another. Though that's something I wouldn't mind being taken even further on future releases. The power noise and post-industrial sounds that seep into Body Prophecy could be taken even further. But as it is, what Body Prophecy is the best at is sounding like a thrilling chase scene from a sci-fi movie, ideally from the same era as the influences it takes from. There's a clear adrenaline rush feeling to most of it, while the other still conjures up futuristic and dystopian images. And the Justin Broadrick remix that closes off the album sounds exactly like what you'd expect to find in the "cyberpunk nightclub scene" from that movie.

So the end result is something that, while not entirely original, casts a wide net of appeal for anything industrial rock related. Accessible, yet with the potential for something even more varied down the road.

Written on 12.08.2022 by
RaduP
Doesn't matter that much to me if you agree with me, as long as you checked the album out.
More reviews by RaduP ››