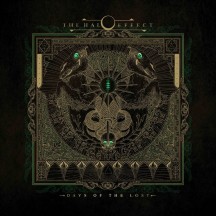 
The ‘halo effect’, roughly speaking, is a phenomenon whereby one’s positive impression of a given trait in a person, group or thing positively influences your overall opinion of said entity. I wonder whether this phenomenon may have some role to play in the initial response to The Halo Effect’s debut.

If you missed the memo, The Halo Effect is a new Gothenburg metal project comprised of 5 ex-In Flames members. Now, given the trajectory of that band over recent years, this statement in and of itself is no particular indicator of quality; however, those 5 ex-members did contribute to some of their more acclaimed records, most notably founding member Jesper Strömblad, who jumped ship in 2010 shortly before In Flames really nosedived in quality. What’s more, The Halo Effect’s vocalist featured as a session musician on In Flames’s debut record Lunar Strain, but Mikael Stanne is probably better known for his tenure in compatriots Dark Tranquillity. Therefore, the pedigree is present in The Halo Effect; the question was therefore how this pedigree would translate into results.

Well, right from the off when playing this album, it’s clear that the members did not do so with the intention of reinventing the wheel or making a grand musical departure. This record is firmly in line with the 2000s Gothenburg template, with the rough edges of the early 90s albums sanded down and given a shiny polish. Across the album, hooky riffs, catchy lead guitar melodies and smooth keyboards are injected with hints of intensity that don’t threaten the music’s accessibility; to go with this, Stanne leads with his trademark rasps, but makes occasional use of his clean singing as well. There’s enough range in speed and aggression to avoid the album blending together, but still it’s not going to offer any surprises to anyone familiar with the scene, as the songs fall pretty much within the Venn diagram overlap between modern Dark Tranquillity and turn-of-the-millennium In Flames.

Still, originality can become irrelevant so long as the songs are enjoyable, which I pointed out more than once last year, so the question is how well do the songs on Days Of The Lost stack up to those on similar albums; given that Act Of Denial is also a Gothenburg supergroup of sorts, they serve as a particularly relevant barometer. Well, on the whole, they stack up fine; this is an album that is perfectly enjoyable for the most part. Among the highlights to me are the bouncy title track, which has a very bright and charismatic chorus, the nifty “Gateways”, and the up-tempo and at-times pounding “Last Of Our Kind”, all of which compare favorably to any other tracks coming out of the genre at the moment, while closing song “The Most Alone” very much captures that dark majestic aura that post-Haven Dark Tranquillity have consistently delivered.

On the flip side, I don’t think this is quite strong enough as an album to merit its current (and presumably fleeting) position at the top of the site’s 2022 rankings, and I wonder how much the hype resulting from the band’s membership is influencing those initial ratings. Compared with a record such as Act Of Denial’s Negative, I think Days Of The Lost can be a tad pedestrian at times; the aforementioned pace of “Last Of Our Kind” is painfully needed after a long stretch of primarily mid-tempo cuts, and this lack of energy does curtail some of the momentum of this album. Additionally, as much as I enjoy Stanne as a clean singer, the two songs in which his singing takes centre stage, “In Broken Trust” and “A Truth Worth Lying For”, are comfortably the duo that I find least interesting when listening to this new record, with the chorus of the former in particular grating with repeat listens.

Ultimately, though, my overriding sentiments towards Days Of The Lost are that it’s a very competent record, but one that’s a bit too safe to feel truly passionate about, except in occasional passages. Certainly, when set against anything that In Flames have done since Reroute To Remain, it comes off looking very nicely, and it stands up well enough in comparison to most of Dark Tranquillity’s post-Fiction material. For most people, that’s enough to call this debut a success, and that's fine; however, if the goal is to become known as more than just ‘the band that those guys who used to be in In Flames formed’, I think there’s still scope for improvement.

Written on 15.08.2022 by
musclassia
Hey chief let's talk why not
More reviews by musclassia ››