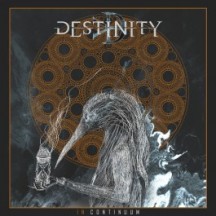 
As much as it can be fun and exciting to find bands that explore the spaces between established genres to come up with something original and fresh, there’s a lot of joy to be had with finding a genre album that nails the style.

2021 is turning out to be a pretty exciting year for melodeath. We’ve already had albums from heavyweights such as At The Gates, Carcass and Insomnium, and there’s more just around the corner from Be'lakor, Omnium Gatherum and In Mourning to come within the next 2 months. Add to that strong recent releases from prog/tech-melodeath acts such as Inferi and Apallic, as well as promising debuts from the likes of Act Of Denial, As The Sun Falls and Ulthima, and there’s plenty for fans of the genre to get stuck into.

The latest potential nominee for the category in next year’s Metal Storm Awards comes from French band Destinity, who caused bemusement in 2012 for carrying the label ‘symphonic avantgarde death metal’ on their Metal Storm profile despite sounding every bit like a Gothenburg metal act. This confused discussion was what brought me to Resolve In Crimson, but it was the quality of the record that kept it on the verge of my radar in the coming years, such that I was intrigued to see how the band were getting along when I saw they had a new album coming out. It would appear that the years since have been rocky, as In Continuum is the band’s first new album in 9 years, a period during which their vocalist left and subsequently rejoined Destinity. Whatever troubles they’ve encountered in the intervening period, they seem to have managed to successfully overcome them, based on this new album.

I mentioned in the previous paragraph that Resolve In Crimson was clearly rooted in the Gothenburg sound, and that remains the case here; there’s plenty of frantic, energetic melodeath riffs on the likes of “The Sand Remains” and “Reflections”, amongst several others, that are clearly inspired by the likes of At The Gates and 2000s Dark Tranquillity, whilst the slicker sound and front-and-centre lead guitar hooks found on "Reject The Deceit" come from the more accessible areas of that scene. If you’re bored of the Gothenburg sound, there’s no point bothering with Destinity, as it’s unashamedly affiliated with it. If you do like the style, however, Destinity are highly adept at writing memorable, exciting songs within that sound.

However, it’s not just a Gothenburg rip-off; Destinity also takes some cues from the Finnish melodeath scene. By that, I’m not just referring to the Mors Principium Est-esque “Dawn Never Breaks” (featuring ex-MPE guitarist Andy Gillion), but the melancholic Finnish sound as a whole. It’s less of an ever-present feature on In Continuum than its Swedish counterpart, but between the brooding closing minutes of “Shadows”, the strong shadow of Omnium Gatherum lurking over “Architect Of Light” and the air of sadness lingering over the lengthy closer “Salvation”, its presence can be regularly felt on this record. I think it’s a strategy that works well; the two styles aren’t particularly disconnected, so it makes sense to employ aspects of both alongside each other, and Destinity have a good idea of how to implement them both within the same framework.

In Continuum is not a record that shines due to its originality. However, I’ve mentioned in a couple of recent reviews that I’m always down for some quality melodeath, and between the likes of Act Of Denial’s debut and this album, the Gothenburg sound is being well represented by some smaller acts this year. In Continuum is full of quality hooks, leads and riffs pretty much throughout, so if you’re a fan of the style, this record is well worth a spin or two.

Written on 16.10.2021 by
musclassia
Hey chief let's talk why not
More reviews by musclassia ››