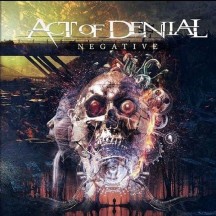 
Given the various extreme metal backgrounds of the more prominent members of this supergroup, it's perhaps surprising that the sound leans so close to one of those backgrounds in particular, but at least they know how to perform that style well.

Act Of Denial is an international six-piece whose most prominent members include Krimh (Septicflesh, ex-Decapitated) and Steve DiGiorgio (Testament and ex-Death, plus 20-odd other current/former projects), but it is the vocalist who is closest to his 'day job' on debut record Negative. Björn "Speed" Strid is best known for his work in Soilwork, and Negative is a Gothenburg metal album through and through, with no hints of the prog/tech/symphonic death heard in Krimh or DiGiorgio's other bands. By featuring two former Soilwork guitarists (IA Eklundh and Peter Wichers) as guests, the connections with melodeath only get stronger.

I've reviewed a couple of Gothenburg metal albums by new bands within the past year or so, and in both my Orbit Culture and Mother Of All reviews I mentioned that I would like to hear a quality new Gothenburg metal record, and that's true; considering how huge the sub-genre has been at times in terms of popularity, there's been a relative lack of new bands emerging to carry the torch now that some of the big names in the genre have left the scene behind (In Flames) or entered something of a rough patch (Dark Tranquillity). Act Of Denial have the pedigree to fill that void, as DiGiorgio has a track record of quality and Soilwork have been on a relatively hot streak in the past decade or so, and Negative has the quality to back up that promise.

In terms of sound, there's no surprises or innovation to be found here. The album's sound is unsurprisingly closest to that of Soilwork, and not just due to Speed's (predictably excellent) vocals; the blistering verse of "Controlled" sends my mind right to "The Phantom" from Soilwork's The Ride Majestic. Act Of Denial aren't a complete Soilwork clone; the jagged riffing in songs such as "Puzzle Heart" remind me of some of Dark Tranquillity's work, as does some of the synth work, and I pick up moments from Scar Symmetry at times as well. There's also cues taken from Gothenburg's American cousin, with the bass drum groove at the beginning of "Controlled" belonging more to metalcore than melodeath.

Negative sees some very proficient musicians writing a very generic version of a well-established style; the hope is that this will translate into some quality songs in said style, and thankfully that is the case. Given the relative disappointments I had with Orbit Culture's Nija and Age Of The Solipsist from Mother Of All, I was pleasantly surprised by both the volume of songs that stood out on Negative, and how quickly they revealed themselves. Within 2 or 3 listens, I could appreciate the blistering opener that is "Puzzle Heart", the exuberant instrumentation on "Controlled" (with DiGiorgio getting to flex his bass skills underneath a complex dual-guitar harmony), the almost power metal vibes of "Lost Circle" and the brash synths of "Slave", amongst other highlights. The choruses are strong almost across the board (I could live without "Reflection Wall"), and the band go hard on quite a few tracks, with some blistering pace on the likes of "Puzzle Heart" and "Your Dark Desires".

The album's not perfect; I feel like Speed's vocals are a tad hampered by the production, in comparison to how they sound on Soilwork records, and occasionally promising songs are slightly undermined by underwhelming sections. The one that sounds out as a good example of this is "Clutching At Rays Of The Light", which has a huge chorus that deserves a stronger companion verse than the plodding chugs it's paired with. Still, overall this is a very solid debut by Act Of Denial. It's in no way innovative, but it's efficient (10 songs, all of which fall between 4 and 5 minutes), relatively consistent (weaker tracks such as "Down The Line" and "Reflection Wall" are still enjoyable) and filled with memorable hooks. There's room for the band to be slightly more ambitious musically on subsequent records, but as a first effort, I'm rather impressed by Act Of Denial.

Written on 23.08.2021 by
musclassia
Hey chief let's talk why not
More reviews by musclassia ››