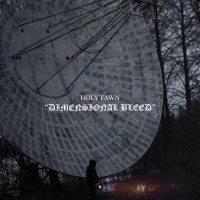 
Sublimation is a type of phase change that takes place when a solid turns directly into a gas, skipping the liquid phase. Dimensional Bleed is what happens when you apply it to metal. The necessary catalyst is loads and loads of shoegaze and alt rock.

Holy Fawn's Death Spells arrived in 2018 at the tail end of the blackgaze craze of the 2010s. And even then it was pretty clear even back then that it would keep the metal in its metalgaze to a bare minimum and occupy the space in between blackgaze and doomgaze. But, at the end of the day, it still did feel like a metal release. Drowned in post-rock and shoegaze and dream pop, but if you were to put a genre tag on it, metalgaze would still probably be the dominant one. And maybe that's my retrospective pink googles talking, since I loved that record when it came out, but now we have a follow-up to it, and they pushed the metal elements even further back. Don't quote me on this, but I have a feeling this isn't really a metal album.

Or if it is, it finds metal at its most airy. Hence why I made the sublimation metaphor. The band does talk about how the music here floats in between metal, shoegaze, second-wave post-rock, electronica, alternative, and whatnot, and I feel like that's pretty on point in regards to how this sounds. It feels like less of a visible mix of genres and more like an atmosphere (guess what atmospheres are made of? Hint: not solid or liquid) whose nuance keeps changing, just like how it's much easier for two gases to mix than two solids. Dimensional Bleed moves in between moods and approaches so seamlessly, hitting all those "ethereal" and "melancholic" buzzwords. Pulsating synths and heavy fuzzy distortion lives at home with whispered vocals and strong melodic echoes, and a lot of emotional impact.

A lot of atmospheric music yearns to create some sort of emotional appeal through the atmosphere it evokes. From Realms to Death Spells, and now to Dimensional Bleed, Holy Fawn's music tried to create more specific thematic approaches to love and grief based on the images evoked. If Death Spells was a walk in the forest, Dimensional Bleed goes beyond earthly nature. It's still not something you could call cosmic in the same way you'd call a Darkspace album cosmic, but some of that is imbued into Dimensional Bleed. Even if the metal elements are reduced to some heavier guitar moments and the occasional shrieks, they still feel like a necessary but not overbearing ingredient within the grander scheme. And because of how the band feels more invested in interesting and evocative textures than any grandiose crescendos, it feels more like a fairly diverse slowcore album than a straight-forward metalgaze album.

Also reducing Death Spells' 60 minutes to this one's fifty also shows that the band's self-editing skills improved alongside their musical ones. There's still some moments that feel too moody and meandering for their own good, but as a whole, Dimensional Bleed is an experience that can border on the magical.

Written on 13.09.2022 by
RaduP
Doesn't matter that much to me if you agree with me, as long as you checked the album out.
More reviews by RaduP ››